It’s heating up down here. The municipal flower beds are blossoming in an entirely different configuration to those at home. Penstemon, lavender, gaura, marigolds, - all subtly planted in an apparently random fashion that mimics the natural wildness of the riverbanks that we saw here earlier this season. A far cry from much brighter, jolly bedding plants packing out the centre of roundabouts at home.

Outside the city in the numerous vineyards the plants in their lines are a hot bright green and the grapes are plumping up under the sheltering leaves. The corn is as high as an elephants knee – it’ll be a while before it reaches his eye… And we’ve actually witnessed the harvesting of a golden field of wheat months before such events back at home.

In the heat, one cool place - in more ways than one - to sit and talk or write is la Place 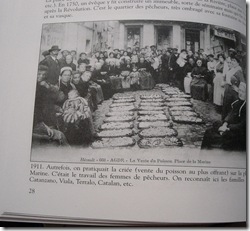 de la Marine at the far end of the quayside, past the rather grand cafes bobbing about on their river pontoons. In years gone by this square was where the fishermen would land their catches and they (or their wives) would sell their wares.

Interestingly, inside the cafe is a very colourful, illuminated picture of a large boat. Before it is a small sailing boat where stand our own sailor adventurers, Nira and Allan and their black dog. (see Nira and Allan)

Even on the hottest day at this end of the quayside, you can rely on cooling offshore breezes, as well as catching the last rays of the sun at the end of the day. I’ve drafted chapters of the new novel here. I’ve watched children play independently in family groups, the big sisters and brothers taking care of the little ones. I’ve watched droves of visitors arriving on their bikes, or off the small ferry that works its way up and down the Herault and stops at this small landing.

The children play around the statue at the centre of the square - a creamy evocation of Aphrodite, spouse of Poseidon, the God of the Sea. She’s wielding a paddle and stands atop a globe of the world. This statue is dedicated to navigators who have set out from this place and sailed the world’s oceans.

ac, who made a voyage round the world in 1826 in a ship called l’Astrolobe. The Astrolobe story has royal connections: hoping to find the last traces of an expedition led by a Captain Lapèrouse, which had disappeared in 1788 in the Pacific, King Charles X entrusted the search to a Frigate, Captain Jules Dinant d’Urville. This Captain loaded up at Toulon on 7th February 1826 on the corvette L’Astrolobe with a crew of 80 men, one of whom was Jean-Victor Cannac.

Now then! This young man’s family owned the Maison d’Estella – the house at the centre of my new story! And the Cannac family lived in the house right to 1916.

We have direct information about nineteen year old Jean-Victor from his sailor’s ticket. He stands 1m60 tall, has black hair which covers his brow; the same colour eyes. He has an oval face, a large nose, a small mouth and a dimpled chin. These fine attributes, his qualities as a sailor, and his willing attitude on board, were much appreciated by the Captain who eventually named an unnamed Pacific island after him.

How can any writer resist all this? It is either another novel in itself … oh dear I might have to come back!… or perhaps I might just borrow Jean-Victor as a prime example of brave Agathoise manhood and plant him in the middle of my story - either in the present day or in 300AD .

As everything here, this is all very tempting for a poor writer….

Work in progress from At The Maison d’Estella

As he and his hefty mate rowed their way between lush banks of the river, away from the city, the curly haired sailor talked rapidly to his passengers about how to make the frail craft work for them. ‘You put your weight so, messire,’ he said to Modeste, ‘then pull back hard. Then pause. Let the water do some of the work. The flow of the river towards the sea will pull you back a little, but you will make progress if you row, steadily, steadily.’

Then he nodded at Tib. ‘And you, young man, you know how I taught you to use the sail when you were small? Test the wind, then raise the sail. But we won’t raise it yet, The wind will be better for you up stream.’ He paused in his efforts and the boat drifted back downstream. ‘See? In this sweep of the river the offshore breezes could drive you back out to sea, And there you will both be lost, lost to us all.’