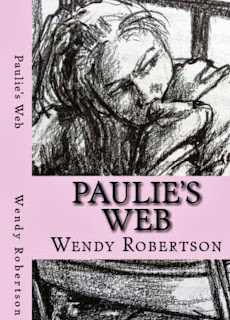 Paulie’s Web by Wendy Robertson
Will be launched At Bishop Auckland Town Hall
7pm Wednesday 16th October
‘A powerful writer.’  Mail on Sunday
The novel Paulie's Web distils the tragedies, comedies and ironies of women's lives not just behind bars but out in society.  In her first few days out of prison Paulie Smith relishes her freedom but struggles to adapt to the scary realities of life 'on the out'. She reflects on her life in prison and the four very different women whom she first met in the white prison van.

There's Queenie, the old bag- lady who sees giants and angels, Maritza who disguises her pain with an ultra-conventional life, and drug addict Lilah, the spoiled apple of her mother's eye. Then there is the tragedy of the abused Christine - the one with the real scars, inside and out.

Wendy Robertson has written many popular and well-reviewed novels for adults and children and a memoir of her writing life, The Romancer. For five years from 1999 she was writer-in residence in a woman’s prison. Now, as well as writing a novel each year, she writes a popular writer’s blog

Wendy  says of Paulie’s Web. ‘It has taken me some years to digest the extremities of my experience in prison and to write my novel as true fiction in a way that pays tribute to the women I met while working there. If, by the by, Paulie’s Web goes some way to cracking the absurd stereotypes of women in prison this will be an extra delight.  While there are dark elements in the novel I make no apologies for its ultimately optimistic tone which is a true reflection of the humour, stoicism and kindness that I witnessed in my prison experience.’

The significance of creative editing in publishing the paperback of 'Paulie's Web'.

'Paulie's Web distils the tragedies, comedies and ironies of women's lives not just behind bars but out in society.  In her first few days out of prison Paulie Smith relishes her freedom but struggles to adapt to the scary realities of life 'on the out'. She reflects on her life in prison and the four very different women whom she first met in the white prison van.

There's Queenie, the old bag- lady who sees giants and angels, Maritza who disguises her pain with an ultra-conventional life, and drug addict Lilah, the spoiled apple of her mother's eye. Then there is the tragedy of the abused Christine - the one with the real scars, inside and out..

The touching stories of these women, past and present, merge together  as Paulie - free now after six years  - goes looking for her significant  friends, who have now been 'on the out' for some years and are -  Paulie hopes - making a good thing of their lives...'


It seems a time for beginnings and endings.

My novel about women emerging from prison has been very popular on Kindle. However there are so many people even now who will only read a novel between covers. And why not? I am a good advocate for Kindle bur I do understand the point of view.

So, earlier this year embarked on creating a newly revised and newly edited version of Paulie’s Web using the much improved Createspace process. I found being my own creative editor  an intense and enjoyable creative process. I had put it on Kindle myself but this process was different again and this is why:

I've been used to handing over my precious novel(s) to an editor with a department of bodies to do the further work. I was careful that in this process my writer-self presented my editor self with the most perfect manuscript possible. Writing and editing are two distinctly different skills.

I am used to asking myself how my novel works in manuscript. Does the narrative flow? Are the characters authentic? Do they develop within the arc of the novel? Is the prose exciting, engaging?

So now I find I have become my own creative editor. Almost for the first time - I have been taking on the mind-set of an editor – asking myself how will it be read? Who will read it.? How will a reader see this book as an object? How will it feel in their hands? How will each page look to an eager reader? That is not just the prose content on the page but how will the whitespace work? How important is the impact of the cover?

The process was very intense, detailed work but because I care passionately about Paulie’s Web it was a labour of love. It certainly worked for me. It has been amazing to see this new paperback-copy of the book emerge from the process. One unexpected  bonus for me was that, after creating this new enhanced paperback version online,  Createspace offered to translate it and download this new revised version as a new Kindle version at the click of a button. At no cost.

Proof copies of the book version arrived days later. (So exciting! Much faster than the conventional process.) It looks good. My new editorial ideas seem to have presented Paulie in her very best coat.


You can judge for yourself.

Paulie's Web  will be  the launched on 16th October at Bishop Auckland Town Hall.Click here for more details, an invitations and the press release (on the tab above also.

American buyers – and I know there are some great US readers who track the blog - might be pleased to know they can obtain Paulie’s Web in book form and on Kindle, on Amazon and other platforms.


We hope you like the book and perhaps we may see you at the launch.  I hope in reading this novel you may understand the plight of women in prison everywhere,
.