The Insomniac and the Writer’s Nightbox

Slipping into sleep is a useful process for a writer.


It gives her a rest from the familiar exigencies of a day dealing with writing the next paragraph or the next chapter; with the inevitabilities of the domestic cycle and nature of professional existence. On top of this the compulsion to dash around the physical and cyber world to prove her presence.


So it’s very good to switch off, drop off to sleep and restore her calm physical and intellectual default position ready to start work the next day.


But sometimes the sleep switch doesn’t click and into our writer’s fertile mind drifts those annoying worries and concerns, those feelings of self-doubt, the emergence of hopelessness and futility.


One of my own weapons against this deadly process is my DAB radio, mostly tuned into Radio 4 Extra, occasionally switching to the World Service – a pot-pourri of radio past and present - crossing genres  and mixing comedy and drama in a surprisingly relaxing way.

In fact there are some broadcast  gems here that make it very worthwhile for a writer to stay awake. In the last few weeks I have had some treats.

There was the dramatization of Susan Hill’s The Beacon. I had read this book before without being thrilled. But somehow the midnight listening made me properly understand that this novel, like her Woman in Black, is a very clever dark novel of place rather than (as I had thought) some pick-up of the theme of misery memoirs.


Then there was the archive Desert Island Discs programme when Sue Lawley interviewed the anarchic Sue Townshend (RIP). There in the midnight hour I thought Sue Lawley came over as somewhat confused. She sounded vaguely patronising when she asked Sue Townshend whether she had ambitions to write ‘proper’ grown up books. ST answered her very sweetly, sending her up with guile.


Then another night there was Brian Friel’s Translations. Set in 18th Century rural Ireland, it is a brilliantly comic, highly conceptual take on the potency and nature of language. I was fascinated by Friel’s character ‘Jimmy’, who only speaks Irish, Latin and Greek. English doesn’t interest him at all.  So when I get up next day I want to buy the play and read it in daylight hours.


All this interesting stuff, of course, prevents me from getting -  or staying  - asleep. So I get up, come downstairs, make myself tea and toast and settle down to watch a saved episode of Midsummer Murders or Bones: such perfect lullabies. Then I go back to bed, fall into a dreamless sleep and wake refreshed to start another day in my writer’s life.

Of course this doesn’t happen every night or I would be a daytime zombie. But, when it is needed,  it is a perfect antidote to this writer’s night-time terrors.wx

I was bred to be a Francophile.

My mother Barbara loved the songs of Jean Sablon. I remember her delight as she listened to his liquid jaunty voice singing C’est si Bon and J’attendrai as it emerged from our little wireless in the corner.

Barbara loved to read novels and most of all she loved stories with scenes in France with the odd French word dropped in.

She couldn’t speak French herself so she was very relieved when I got to the grammar school at eleven and was learning French with the exceptional Mr Phorson.

Now I could tell Barbara how to pronounce the words she read in her novels and talk with her about some nuances of meaning. She loved that.

So, I learned French for eight years and passed all my written and oral examinations. I could read books, articles and academic papers in French.

However, apart from  listening to Jean Sablon, I never hears native French spoken until I was thirty two years old and attending an education Conference in Sêvres where the lecturers’ immaculate accents were music to my ears.

Since then I have travelled and stayed in many parts of France and learned that the accents can be as different from formal French as are Glaswegian and Newcastle  from English received pronunciation..

Even so, my eight years with Mr Phorson meant I never felt a stranger there and grew to love France more and more.

I finally reached the Languedoc where the native  language has an identity of its own and many people speak two languages – conventional French and the local ‘Oc’ – as different as Welsh is from English.

But it is in this distant place that I feel most at home. In this magical place my writer’s intuition helped me see through the veils of time right back to the Greeks who founded the port of Agde in 600BC. I was so inspired that I set my novel An Englishwoman I France  here.

I am excited now that I have just finished another novel set in France.  In this novel the story only travels back from the present to to World War 2. But still Writing at the Maison Bleue  reflects something of the magic and the layers in time I experience in this Francophile's heaven.

One for the Kindle Version 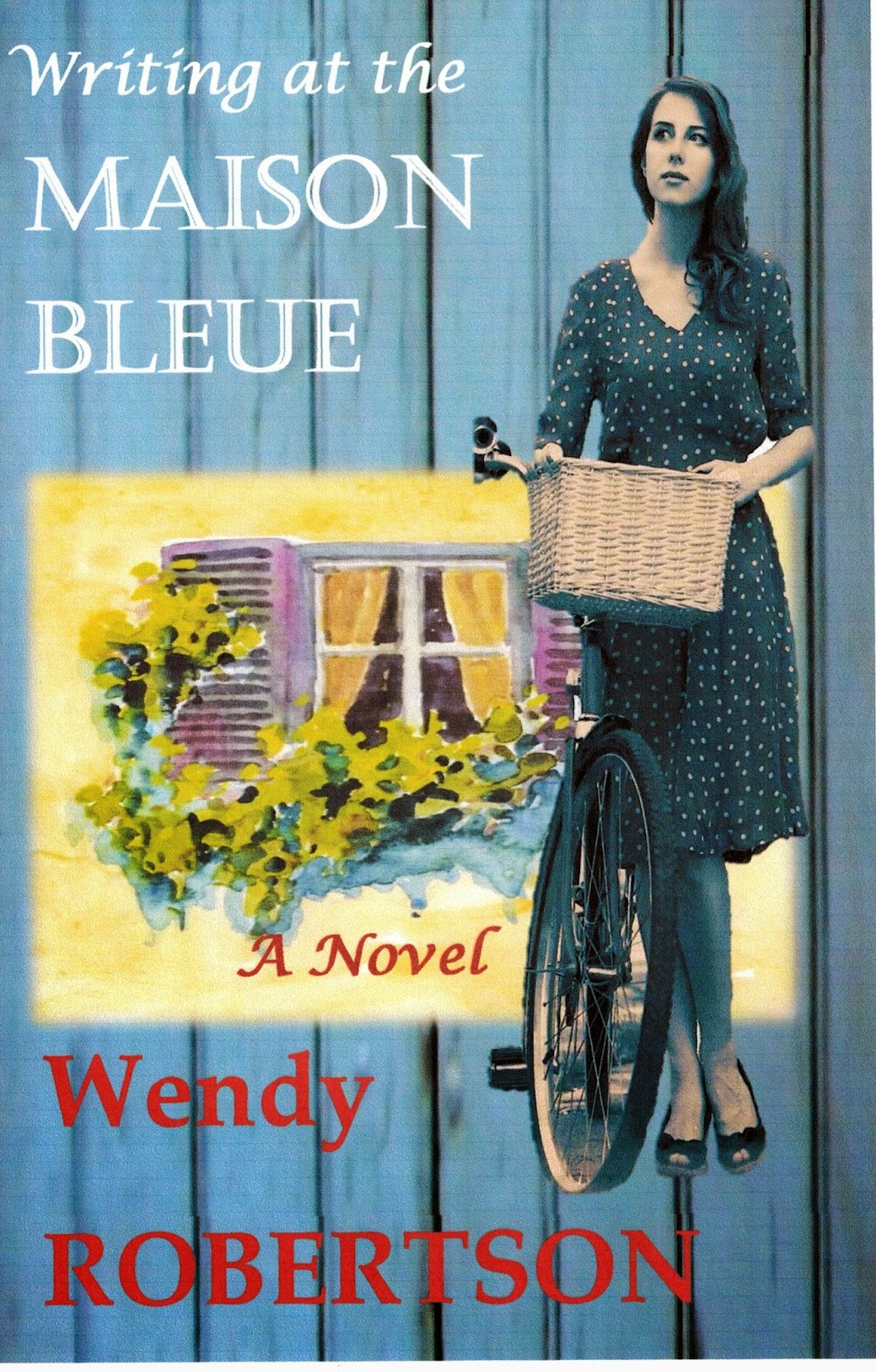 The other cover is especially for the paperback.

- to be launched on May 1st

In my novel Writing at the Maison Bleue two of my characters visit The Ginguette, a place I know well.
It is  a place lined with pictures of the great chansonniers, including Jean Sablon. When I first found this place I thought how Barbara, alas not here now,  would have loved it.

Extract  for you from ‘Writing at the Maison Bleue’.

'…Then they cross the bridge over the water swilling through the canal lock and come upon the outdoor café strung with fairy-lights, buzzing with people who are standing, sitting, lounging, dancing. As they go through the narrow doorway the hum of voices and the jaunty sounds of an accordion are mixed with the plangent chords of an acoustic bass guitar and the brush and click of drumsticks.
The style of the Guingette is eclectic crossed with exotic - sprawling plants; straw walls, floppy thatched roof. The walls are pasted with blown up pictures of chansonniers past and present, dressed in the gangster-chic of the Thirties and Forties. In this place these balladiers are clearly the heroes. Francine, thinks Ruthie, was a young heroine of those times. Perhaps she and her friends would have danced in places like this, whispering into the ears of Germans, policemen and prominent men: betrayal, seduction, courage and collaboration all danced out to the sound of the accordion…'

Writing at the Maison Bleu is available to pre-order HERE

https://www.youtube.com/watch?v=AHz1iAVnnLw
Posted by Wendy R at 16:50 No comments:

Aspect of my Writing Process Newsletter

I am very excited about my new Newsletter to be called