New W.I.P.. After the bombing and in a safer place

Work In Process for the first book in my trilogy
Lifespan
Book One: Embarking

(Maggie gave birth to Alice in during the bombing of South Shields. They are now in a safer place...) 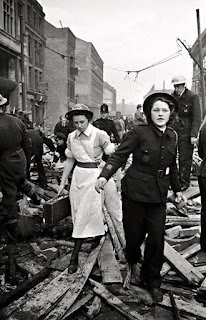 ‘
Now Alice, we’re gunna see your pretty picture,’ says Maggie, unbuckling Alice from her harness, leaving the big pram outside the photographer’s shop.  The bell tinkles and Eli Mason looks up from the far counter where he is wrapping a big picture in brown paper and string. He looks up and smiles. ‘Ah!Mrs… er  Miss … You’ve come for your photographs!’
She smiles. ‘Just call me Maggie,’ she says. ‘Yes. We’re looking forward to seeing them aren’t we, Alice?
Alice makes her mouse squeak in response and Mr Mason laughs He puts an envelope on the near counter. ‘There you are. Good job,  though I say it myself,’
Maggie leans over to get a closer look.  ‘Amazing. Just perfect Mr Mason.’  She has tears in her eyes. ‘She looks so much … herself.’’
Mr Mason smiles ‘That’s what we want from our photographs. People looking like their best selves. Especially these days.’ He pushes a mahogany frame towards her. ‘Choose the best picture and put it in this frame.’ For free,
Maggie puts her hand on it and hesitates,.
‘It’s a present,’ he says. ‘For Alice.’
Maggie smiles, relieved. She only has the money for the photos in her purse.
He wraps the photos and the frame and - after protesting – takes  the money for the photos from Maggie. ‘Well, if I must.’
She tucks the package into the pram basket and makes to go. Mr Mason puts up a hand. ‘I don’t know if you’re working, er … Maggie?’
‘Well, I work four nights in the bar at The Welsh House. I'm staying there.’ She smiles. ‘Singing for my supper.’
He stares at her, ‘As a matter of fact I need a hand here in the shop. The women are signing on at the factory and the men are in the army or at the pit,. Much better money of course. I told you I’ve lost  Bernie  didn’t I?’ He hesitates  ‘Would you be interested to work here? Maggie, times to suit you?’
Maggie smiles faintly. ‘Its wonderful to watch you work Mr Mason.. But I know nothing about cameras, or taking photographs.’
He smiles ‘I can teach you. Took young Bernie straight out of elementary school. In six months he  was nearly as good as  me.’ His smile fades. ‘Not that that’s doing him much good now  at the bottom of the Atlantic.’
Maggie finds herself nodding. ‘Now Alice is at school perhaps I can make the time.’ He is delighted, bustling to find his calendar to arrange when she can start. She is outside the shop and walking down the street with Alice in her pushchair before she realises that she had said yes to Mr Mason because he was so sad about his lost boy.
Posted by Wendy R at 11:38 No comments: Back on Song, Spreading My Wings Again 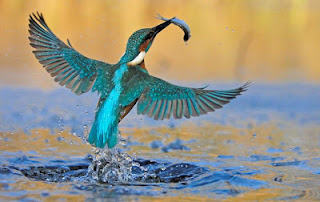 This last year has been a bit of a health challenge so sadly I have not  got to comment on my blog or my Twitter to keep in touch with some great people who think about the world and write and read and let me know what they are thinking.

Thankfully things are back to normal more or less normal now  and I am reading and writing at last inside my normal writing rhythm  and am two thirds of the way through very the first novella ‘Embarking 1941-1951’ in a trilogy called Lifespan which takes place between 1941 AD to 2,000  AD. Ambitious?   Moi?

So you might say in these months I have only been talking to, and creating for, myself, and that has had to be enough. But now I am about to spread my wings and start to sing again. Can’t tell you how good that feels. Like many writers, writing is not only what I do but who I am. Without writing I am nothing.

Regular readers here will know I am a great champion of the computer as a writer’s tool. It’s there alongside the Internet, the network of Libraries, story telling among friends and family, and a lifelong, well developed Imagination muscle.

However the the longest lasting and the most unique tools are my ink pens and my spine-bound notebooks. I have more than forty of these. I can pick up any notebook and revisit the sheer adventure of building that story which was published ten years ago.walking alongside my  invented characters and following them wherever they lead me. into darkness and light.


I was wonderful to hear writer Patrick McCabe  on BBC’s Book Club describing his process and insisting that the progress of his novel Butcher Boy came from inside the writing process  and how surprised he was when certain very dramatic things happened. I can very much identify with that.

Herein lies the originality and the energy of any good novel,  This is the antithesis of many present day novel - certainly  decently  written  but rather formulaic and targeted  at the widest market where the first principle is profit. This is not to denigrated my fellow  writers at all. Publishing seems to me to be exhaustively and exhaustingly  market-driven with books seen as products rather than works of art and skill. 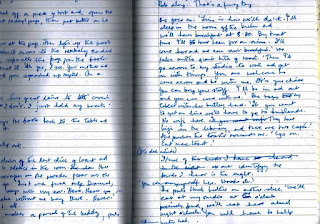 of my characters – names, ages etc, This is so I can keep these imagined facts consistent like the continuity girl on a file. The list came to 25 characters, names and occupations. Admittedly there are only six or seven front line characters. But who knows where they will lead me?  Only time will tell.