Bullying, Medusa and a Lesson in Classics 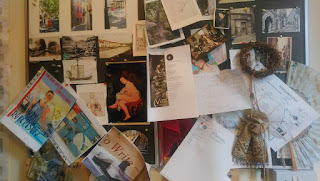 Gathering dust on the wall of my hideaway writing room  I came across a fragment of a Caravaggio painting of the head of Medusa. Underneath this was a short-line piece I wrote more than a decade ago. In reading it again I was shot through with the pain I felt as a fifteen year old schoolgirl being bawled at an bullied by boys in my school, who nicknamed me Medusa because of my wild uncombed mop of hair.

I can understand now that writing this painful piece brought some kind of delayed resolution. But even today I can see from these lines that the scars of the hurt are still there.

Bullying, Medusa and a Lesson in Classics. 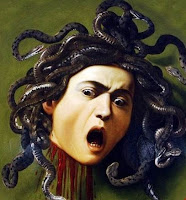 In our classics lesson we learn that
Μέδουσα means guardian, protectress –
a child of strange parents. People saw her
as a monster with living,
writhing snakes for a top-knot.

The boys turn their gaze on me. One says
‘Just take a look at that lass, mate
And turn to stone. That Perseus guy -
didn’t he take her head for a weapon?
Didn’t he give it to the wise Athena –
To decorate her shield?’

His words freeze my face. Another boy says
‘What’s wrong with you, lass?Got your
jam-rags on?’ Fear fuelled by the words
of these clever sons of pitmen
crawls through my veins like fifty snakes -
lying there for some years, writhing.

These boys  win high marks for their classics homework -
their pages shimmer with the spirit of Perseus and his mates
as they kept a weather eye out for red ribbons
on the spiked horizon, wary of being waylaid
by the sweet songs of sirens, only to find themselves
shipwrecked through enchantment.

As the years roll on our lives change
and we take our true places in a changed world.
I begin to think that, to call me Medusa,
perhaps these lads  feared my tangled Afro hair
Perhaps they felt an ancient fear
at meeting my  agonised, stony gaze

Auntie Mim and Her Talent With Bullets


Searching around for names for characters which are time-appropriate and psychologically-appropriate for one’s creations characters is one of the engaging aspects of beginning a new novel. So in the past year in writing Becoming Alice I have been very involved with this character called Alice whom follow – with her family  - from age zero to the age of 11. She has become entirely real to me.

I can’t quite remember how and why I named my central character ‘Alice.’ In the end she just seemed to walk out of the mists and tell me that that was her name. ‘My name is Alice.’

However in recent days something has occurred to make me think that the mists out of which she walked was my own subconscious. It was only after finishing the novel and celebrating its publication has it occurred to me that I actually had two aunts called actually called Alice.

One was my mother’s sister who, among five clever and accomplished sisters, was the one who was just that little bit dizzy. Her sisters would say, ‘Oh well! You know, that’s just our Alice.’  The other Alice was my father’s sister who was christened Alice but throughout her life she was known  as Mim. They told me it was because as a small child she would say me-mim-me a lot. She got a lot of attention in the family.

Auntie Mim was brought to mind for me by the fact that people reading my posts about my new novel Becoming Alice and other preoccupations have also all  also been dipping into the archive and pulling up a post I wrote in 2010 called Auntie Mim And Her Talent With Bullets.

And as I said Auntie Mim’s birth name was Alice.

As in  all generations in our family  Auntie Mim was fascinated by words. Her brother - my father -  wrote wonderful letters, read loads and was an obsessive cross-worder.  My late brother not only did crosswords but created them as well. One highlight of his mature life was competing on Countdown. My sister, a keen reader, was an accomplished cross-worder until seduced by Sudoku.  I write for a living. My daughter and son both write and love words.  And so- on …

In the present day my blog here,  Lifetwicetasted, is part of the contemporary world of word-play, as is Twitter,  which I now ‘play’ just a bit.  (For uninitiated  this involves writing something in 140 characters or fewer and posting it on the Twitter site. Then anyone who reads it can respond to it  in 140 characters or fewer. And so on. Anyone can respond to anyone.)

There is a lot of verbal  flotsam and jetsam floating about out there.  But the ones I enjoy are cryptic, punchy, imaginative, speculative, fluid, quick. It’s amazing what you can get into 140 characters.*

I have to say, as a word-junkie, Twittering is fun. I am sure Auntie Mim would have loved it Twitter.

Of course there was  no Twitter in the 1930s and 40s  but Auntie Min was obsessed with this thing called Bullets  - competition with a curious similarity to Twitter a competition in The John Bull Magazine where you had to respond to a prompt and create cryptic associated phrases for the ‘Bullets’ competition. I can’t remember the number of words but it was tight. She  was quite good. She sent them away and  even won at trickle of money prizes now and then.

It seems to me now that she would have loved the mental gymnastics of Twitter.

So, re-reading the post about Auntie Mim  the first time in some years. I can only speculate whether having two Aunties call Alice  lying there in my subconscious might have generated the name of my heroine in Becoming Alice.

There were many kind and interesting responses to my  post about Auntie Mim and the power of Bullets. But here are just two really significant and touching response which really stand out to me eight years later. I will share them here:

‘My father, John Irvine, won the biggest prize ever with a bullet in John Bull, in 1933. The money was 4,000 guineas (the equivalent today of £300,000.) He was a humble joiner in Paisley and with the money he moved with his family (wife and four children) to Troon, bought a bungalow and gave us all an education. He died at the age of 91. His winning bullet - at a time when monuments showing a soldier with a rifle were going up - was "Man with a Gun" (given words), completed by him with "Wasn't Greatest Sculptor's Design". I shall be eternally grateful to the John Bull magazine and to my father for the opportunity they gave us to better our lives.’

‘I am one of John Irvine's children mentioned above. I am 81 now and the other three are still alive. Yes, we moved from a Paisley tenement into a Troon bungalow and went to Marr College where we got an excellent education. His winning bullet was considered at the time to be the cleverest there had been.’ 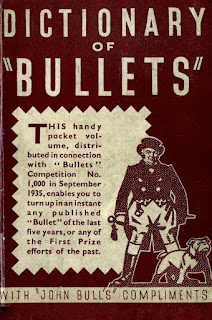 That’s the power of words…

I thought you might be entertained by a few of the tweets I cooked up by me in response to  The other people are highlighted if you want to know what they said…
To @paulmagrs Friendly Whitby ghosts mean I can be there in spirit, writing.
To @nwndirector Alnwick Castle water falls beat all earthly dress, even Phillipa's
To @daneetsteffens Truth is only the first step to understanding perhaps. Or understanding is a precondition for truth, more likely.
To @normblog An old friend of mine had a party to decorate her straw coffin, thus introducing meaning to her funeral - but not yet...
@Adelica Politicians wives wheeled out to order, in the old tradition of the vicar's wife or the wife of that old devil at the manor?

An Illustrated Story of a Book Signing


And even I didn’t escape Gordon’s magic. Without really intending to I bought a book called Customers and Patrons of the Mad Trade – the Management of Lunacy in 18th-Century London. (Now, she thinks, there’s a novel there somewhere