We walked along, your  giant’s hand in mine,
long fingers up inside my woollen sleeve -
I remember nights she left the house
when you read the paper and I scaled your knee
settling, birdlike
into that rustling space.

I remember how we cut out pictures
for the Panjandrum book. And you read us stories -
your voice going up and down

What would you think of our young one?
Tall in Tai Kwan Do gear
white clad and obliquely oriental -
Or ready for cricket
complete with pads and faceguard,
grave and somewhat pedantic – a family trait

When I passed the age of thirty seven
- a lifetime since -
it dawned on me how young you were -
yet at that dying time
you seemed to me so very old -
it did not feel too terrible. 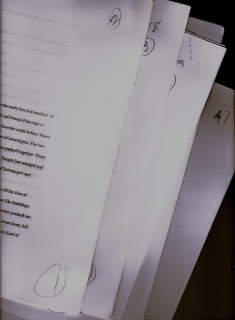 For me,  researching and writing a novel can take anywhere from eighteen months to two years. More! If you take all the inklings and stirrings and brainstorms that precede a novel you can add another three years to that.
My new novel AOR* was just a twinkle in my eye about five years ago and it's a couple of years since I started to write sketches - actual sequences that could end up on a page in the final novel; dialogue (ditto); idiosyncratic biographies which would help me to become intimate with my characters: I also gathered notes, poems metaphors, analagies, images, quotations. maps, images and drawings.


Every day something new occurs to me, Some of this stuff goes on the wall, some on the table, some in boxes.


The more I go through this process the more things come to me - gathering like iron filings on a drum. (I am reminded that psychology there is a process called set presupposing perception. That’s when you think of something and then you notice it everywhere...)


In this way I begin to build up a mass of relatively shapeless inchoate material which has sprung out of that the original inkling: that first twinkle in my eye.


There comes a time when the mass becomes critical. In The Romancer I described this point as like fragments in the interior of a kaleidoscope. You shake those pieces and a distinctive shape emerges,


To develop my iron filing analogy - at this point you put a strong magnet under the drum and the iron filings shift into coherent and meaningful shapes and patterns.


This is the point where I find at last where the novel will begin;, what might be the issues; the possible low points; the possible high points; the ultimate climax; a possible ending. This is also when I discover significant gaps in the meaning and the structure of the narrative.
So begins a new brainstorming process to create credible links and  substantive new material to make the prose and the narrative work.


Earlier this year with this current novel, AOR*, I felt as though I had more than enough material and the novel was going out of shape again. I could feel the energy of the novel outstripping its form. This can be quite a worry,


Somehtimes, at this stage working at home one can get stuck in the rich alluvial soil of a novel. For An Englishwoman In France at this stage I  went to France for two months to clear my mind to sort this out.


This year my solution to this problem was - with my good writing friend Avril - to spent five days in the peace and quiet of Balliol College in Oxford to regain control of this mass of writing, material and inspiration and make my novel work.


And in that academic peace and quiet the final shape of my new novel did emerge. Reaching this point can be truly magical. This time it was like a key clicking in a lock: a door closing behind me. I knew that was it. I had the shape: all I had to do now was finish the novel,


ALL! Well there you go.


On element that emerged in Oxford was that this novel would take place over an eight day week. While I was there I made a wall chart that showed me how all my parts fit into the whole.


I am now working in and on the crucial Saturday in the lives of my characters.


*Title under wraps just for now, but it’s a good one.


PS Next!  - a work in progress extract from the end of the novel...

The Boy Who likes Chocolate and Academic Life...

‘A’ the boy who likes chocolate is visiting from university where his life is exciting, fulfilling, challenging, surprising: all one would wish. The usual subjects are covered: food, girls; a girl; studying; games; training. (As the game in question is American Football there is much to learn.)


He plays me beautiful new sounds on his acoustic guitar which remains his relaxation in this welter of activity. He restrings his acoustic guitar. He takes to pieces his electric guitar and puts it back together again. It still works.
We talk quite bit, as is our custom. We get to genetics - his central study at the moment. He teaches me some very basic facts about genetics, with diagrams to  make it accessible. This is a world where the language is signs and concepts that can only be explained graphically.  New words emerge, which have a poetry all of their own: genotype, alleles, epistasis, diploid...


We discuss the  potential magic of intervention in the womb which could bring about the end of life-threatening genetic conditions. Inevitably we move onto ethical concerns and how medical ethics will be an important part of his future study.


Of course we move onto the way in which  nurture (my field) interacts with genetic predisposition. We talk about my own lifelong interest in twins – quite significant in the research into child development, which was once my own field of study.  My obsession was possibly due - I say - to the fact that my oldest siblings were twins,  christened the moment they were born  who died close to their birth.

In the subsequent generation at the time of their birthday my mother would talk about them. The Twinnies would have been sixteen today … the Twinnies would have been twenty one today…  Calling them Twinnies made them seem so alive. She told me once that when the second twin died she stopped believing in God.
A man from around here once told me a story about an old woman, referring to her as ‘the Third Twin’, meaning the third of identical triplets. I looked it up and found that the likelihood of identical triplets was one in two million. That notion is at the core of my novel Family Ties. No novelist could resist it. Come to think of it my novel The Lavender House involved in-depth research into the Kray Twins, whom I used as models for two characters in that novel.  I suppose the notion of twins is closely linked to the nature of identity, which is a theme in so  many good novels.


‘A’ and I have played Scrabble together from when he was about four years old. For a few years I would manufacture sequences so he could make good words.  But soon we were playing  for real, which he enjoyed as,  despite being a quiet person, he is intensely competitive (think Rugby and American Football...) We played Scrabble this week-end. I banned two letter chemical formulae as it gave him an unfair advantage. It was a long, high-scoring game.
Needless to say, he won.
wx
Posted by Wendy R at 11:49 2 comments: