A poem found in the big sort out

To begin  a new thing

one has to bring about 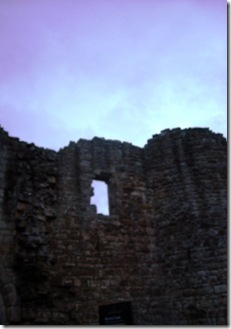 the end of earlier things -

Conception is the end

Birth is the end

of a secret inner affair

of love out in the open -

And so on, back to Eve

though even she engendered

the demise of Adam’s spare rib

BR’s calls to France were mostly about the ordinary business of being apart but he did mention Stan Barstow’s obituary and I asked him to clip  it for me.

Been back a fortnight and have just come across the clipping. I was instantly making connections  First to the astonishing resemblance of Barstow to the glamorous Gregory Peck – who was all over the screens in the years when Barstow was writing his groundbreaking novel A Kind of Loving in the time he could spare from his job as a draughtsman.

The writer mentions Barstow’s role in the rise of the regional literary novel in the late fifties and early sixties. Possibly to the detriment of his national standing, Barstow stayed in the north, asserting later, ‘To hoe one’s own row diligently, thus seeking out the universals in the particular, brings more worthwhile satisfaction than the frantic pursuit of the largely phoney jet age internationalism…’

A largely fair obituary is marred by the inclusion of one critic’s  comment that ‘At least you  know where you are in the company of Mr Barstow’s sentimentalised Tykes … there’s usually Trooble at t’Mill, the privy sits proudly at the end of the garden, and lives revolve round the family.’

Yaargh! These mean,  mistaken and ill conceived  phrases manage to combine the regional. literary, linguistic and class snobbery that still has a stranglehold on the British literary world. As a writer of some ‘regional literary novels’ myself  I too have encountered this same frustrating prejudice . American literature celebrates fiction from its non-metropolitan regions and is much more deep, rich and  substantial for it.

Back to the clipping. The other absolutely astonishing resemblance in the picture is to my own Dad, who would have been Barstow’s contemporary. The same sharp strong features, the same film star moustache and thick dark Brylcreemed hair, the same fierce direct look, neat suit and tight tie.

Footnote; My dad died when I was nine and my mother was thirty six. (See my memoir The Romancer on the sidebar). She adored Gregory Peck ( the George Cloony of that era)and in her long years alone went to see every film he made. She went to see Captain Horatio Hornblower six time. Now I do rate G Peck myself but this seemed excessive.

Or it did. until my revelation today.

An Englishwoman in France.

In this eerie, atmospheric paranormal novel, Robertson deftly intertwines two time periods, slowly absorbing one into the other through her remarkably likable protagonist. Although current-day syndicated British horoscope writer Stella sees dead people, she can’t see her young daughter, who was brutally murdered, and Stella desperately needs closure. In 301 CE, young Tib, a healer, and his Corinthian mentor, Modeste, spread their belief in the newly organizing Christian religion and become Roman targets in Gaul. When Stella’s long-suffering husband takes her to France and they rent what was Tib’s home, Stella sees the boy and Modeste around town. After Starr’s husband returns to Britain and his job, leaving Stella alone, she finds herself in Roman times, a companion to Tib and Modeste as they tangle with the emperor, his wife, and the old religion. Robertson’s meticulous details about the Roman era and early Christians come to life in this tale exploring time, souls, and love. 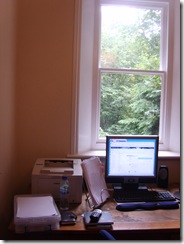 I came back after three weeks in France to find that GR had stripped my little writing room of the messy palimpsest of five years of writing – pictures on pictures, postcards on print-outs, three tattered dream-catchers, two computers, two printers, stacks of paper, piles of notes, hundreds of notebooks. Wires and cables. And books, books books.

I’d come to think this retreat  was picturesque, full of potential literary treasures, stacked with ideas. But truly,  truly, it was becoming an image of an overstuffed mind. clogged up with a plethora of spurious inspirations and notional ideas.

Much of this stuff had spilled off the shelves onto the floor. So I asked GR if he would kindly build me another long shelf while I was away.

Golly, had he done more than that! He’d stripped the room of its entire contents. Then he stripped the walls and painted them, refurbished the sash window so it works again. He stripped the floorboards and restored them to a gleaming, nut-brown Victorian patina.  Oh, and he built three new shelves: one very large, two smaller and narrower.

So, when I got back home there was my little writing room looking very empty and twice as large: an inspiration in itself.

So all I  had to do now was reintroduce all my stuff to this new, pregnant space. Of course this meant I had to sort it all and only allow back into the room things I really wanted around me.

As I sorted I found two novels I had forgotten – one pretty good, actually. A whole collection of short stories written more than twenty years ago. A lever arch file with the complete contents of a book I had (have) in mind about writing – called, I see, The Determined Butterfly. I found two plays I had written from my novels .  I found numerous poems written in various notebooks. One (see below) from 2002 when I must have been in a scary state of mind.

in some proper order. Ditto my diaries, my inspirational CDs, my archive of floppy disks containing all my early work, my workshop files. And my radio stuff - together at last in black boxes.

. Now all my work is accessible, all in order.

Then. last and possibly most important, I have re-done my inspiration board with new images. The last things I pinned up (again!) were the dream catchers… 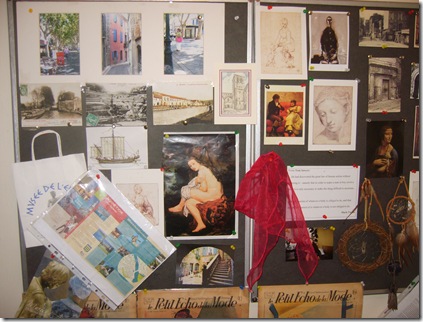 The decks have been cleared so I can sail on with my next novel which is half-way there ,but was somehow stopped by… the stuff!

Lady of shadows where do you walk?

She  lingers now at the edge of the dark

Walking the streets with her diamond eye

Choosing the child for the next conflagration

Lady of shadows, where are you walking?

She turns into an alley darker than Hades

Diamond gaze cuts the husk of his eyelids

Igniting his soul with the dark fires of hell

Lady of shadow, where are you walking?

I’m running before you, fearing your gaze

Fearing your hands with their tin-drum beat

Fearing the reach of your long, thin arms