The Potency of Paperbacks 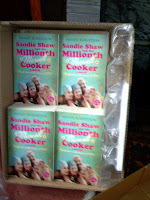 This week the postman arrived with a big box of author's copies of the paperback version of my novel Sandie Shaw and The Millionth Marvell Cooker. I have written a good number of books - see http://www.wendyrobertson.com/ - but nothing beats the sight and smell of a brand new novel that started on my desk ,written with my inkpen in my notebooks. The cover of Sandie... is great. My publishers, Headline, have caught the spirit of this novel in those bright faces.

I don't know why paperbacks are so much friendlier and sexier than hardbacks, but they are. They are like sparky teenagers in comparison to the maiden aunt hardbacks. Paperbacks seeem set to live harder, travel further and die younger. They will hang around the streets, end up in strange places and fall into the wrong hands.
Boy, they will they have lived!
But where would we be without our sturdy maiden aunt hardbacks? Mine have done me proud, nestling in libraries all over Britain - even now in Australia and New Zealand according to my post - perhaps it's a kind of personal diaspora. People read your books and feel they know you. That's a naked truth for writers. B - who keeps me right on numbers - tells me that my novels are borrowed the best part of two hundred thousand times a year. Every year. Sturdy maiden aunts, these.
So it's good that Sandie Shaw and the Millionth Marvell Cooker - out last year in hardback, this year in paperback - is getting its second breath. (See also post 1 Making People is Mad).
I have written stories set in many places but never before in a factory. This has been an omission because - knowing the fizzy politics and dark humour of the factory world - I always knew it was ripe for a good novel. I never liked the fact that factories are always presented as dark, dingy places. In Sandie Shaw and The Millionth Marvell Cooker I wanted to show the colour and the human comedy of a factory, the charm of its people, the potency of its dark places. As dramatic settings, I think factories beat city firms, restaurants, and shopping malls into fits.
So anyway, my energetic teenager Sandie is now let loose! And I am sure her maiden aunt will watch her tearing around with sturdy pride. Let me know if you like her.
Wendy
Posted by Wendy R at 09:10