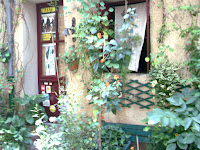 When I was little I liked making dens. I remember making one on a low scrubby hill covered with whin bushes not far from my house. It was no rural dream - just a patch of wild urban land. (All gone now, buried under a bypass).

In my den there was a stone for a seat and piles of leafy branches as a kind of couch. From the seat there was a narrow view of a modest water-seepage lake that was teeming with frogs and a good source of frogspawn. The nicest thing was that it was only when you were upon it, that you knew about my den. It was a perfect bolthole: for a while it was an escape from a stressed and crowded life when things got on top of me. 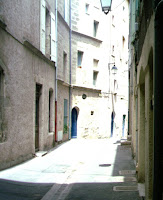 I would take a book and a bottle of water sit there quite seriously and read one of the dozens of books I devoured each month. Since then, one major thread in my life has been this running away to boltholes where I could read - and particularly write in peace. Mostly it has been to write.

My boltholes have ranged from a cottage, then a flat by the sea in Alnmouth, a bungalow near Stranraer, The Gladstone Residential Library in Wales, The Tyrone Guthrie house in Ireland, a flat in Colorado Springs USA, an Apartment in Fiskardo on Cephalonia. These escapes have always been fruitful in personal as well as writing terms. Sometimes I have escaped on my own; sometimes I have gone with writer friends, sometimes with B, who is the most peaceful and unstressful companion.

The longest stay was the Tyrone Guthrie Centre where I stayed for a month and completed a whole volume of writing emerging from my prison experience, which is still a resource for me today. There were other writers and musicians around but everybody’s creative and physical space was respected.

But now! We have the bolthole a la Francaise: two months in a house in Agde in the Languedoc. Agde is a pre-Roman town, We will stay in a house on one of the medieval streets that is part of the old city wall. Who could not write stories here?

We will be writing lots. And reading. But also looking, talking, eating and drinking. And relaxing. Well, trying to! All this with my great writing friend Avril (www.avriljoy.com ) and for part of the time my very special Debora (www.loveandalickedspoon.com ) and her super Sean. Debora will be working – that is cooking, experimenting and writing about her beautiful food with a French connection – and we get to be the guinea pigs. Yes it is a wonderful thing, especially for the non-cooking mother. 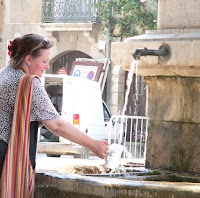