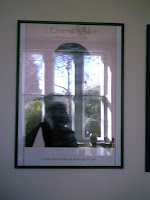 Currently I am thinking quite intensely about ghosts. My Auntie Lily was a medium - you know, one of those ladies who would stand in a church hall and bring messages from the dead to anxious people. She was a dramatic women, remarkable in some of her perceptions.
I have seen a few ghosts in my time and some of them have crept into my stories. Then there is the seeing through time, which happens now and then on ancient pathways and in old buildings.
There was the woman who wandered about my house for a few years before fading from sight and sense. She had large bosoms and folded her hands together across her stomach. She seemed to offer no harm. My sceptical friend B, who used to come for a glass of wine after our pottery class, saw this woman and thereafter never went on the back corridor by the toilet which seemed to be her territory.
Then there was the child standing mournfully at the end of the bed in the rented cottage. And even more dramatically there was the column of bright light at the end of another bed in an hotel by Lake Maggiore in Italy. I felt certain that this amazing light was an angel of some kind. I blinked my eyes hard and flapped my hands but the thing stayed far too long. Then there were boys from another age playing in the street where B was born. And there was my mother, two years dead, standing at the top of the staircase, arms open wide.
More generally, there are the shadowy presences in buildings, lurking at the edge of my eyeline, or hiding behind the shadows of the afternoon. This haunted feeling has pursued me in recent years even to the deep south west of France where sighting and feelings have come on very strong and buildings kept vanishing.
Talking with my writer friend P today we speculated whether all novelists, whether they know it or not, develop these gifts of seeing through time and intuiting dead people walking. When I think of Auntie Lily I sometimes wonder if it's all in the blood and bound up with stories. They were great storytellers too, Lily and her sisters. I do find that many of my odd visions can creep into my stories and inhabit my characters - even though I've never dealt with these ghostly themes 'front on'.
But now I'm thinking that it's time to do just this. I've decided to test these feelings to the limit and I'm off in May all the way to the Languedoc to write a story that has been brewing inside my head for more than two years. It will be called, I think, At The Villa d'Estella.
I already have some sketches. Here's one:
'...Now I see old men about their canal business in those times, steering loads of coal and steel, bales of cloth, racks of wine. And now they fade and there is only the limpid beauty of the water, silver green, slate grey, alternating between ladder shadows of the straight trees slicing into the bright blue sky,
One hour into the journey I notice the boy, orange haired and eyes too bright for life. He's leaning backward gazing up at the sky, his long hair dropping towards the water like strands of fire. Beside him sits a tall young man in a crew necked sweater; no shirt. He's reading a worn black book. Occasionally he puts out a hand to stop the boy falling.
They are an odd pair. Father and son? No. Brothers? I have to settle for brothers. Even so, there is no resemblance. None. The younger is fair and freckle faced, the older heavier set and dark, his narrow face sardonic.
I have this prickle of unease...
Can't wait to get there and get on with it...
Wendy
Posted by Wendy R at 18:06