A Mslexia of Writers? 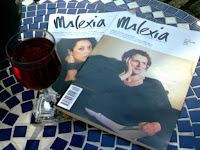 There’s no better way to approach the city of Newcastle than by train. I never tire of looking up and down the River Tyne through a lacework of bridges to the distant city skyline then peering closer at the foreground, where bright new developments crowd the riverside on quays that, a century ago, heaved with rough commerce as ships jostled for prime places to unload their goods.

Off the train, out of the portico’d station, we dodge the traffic to cross the road and make our way up Pink Lane. (This when I was young, was famous for being the territory of working girls plying their trade). Then into a pub called the Forth – punters jostling like those old ships for prime place to buy their wine. The place is bare floored and bustling with people of all ages having drinks after work before going on somewhere in the city. Reminds me of London.

My friends Gillian Wales (http://www.roomtowrite.co.uk/ ) Avril Joy and I make our way through to a back room full of writers talking. This is a gathering generated by Mslexia Magazine http://www.mslexia.co.uk/ - the national magazine that is published out of Newcastle. The gathering is open to anyone with an interest in writing and literature, and as this is a magazine that focuses on women writers, the room was mostly filled with the friendly roar of women talking.

One exception is Peter Mortimer, publisher of Iron Press, (http://www.ironpress.com/). Peter – publisher, playwright, poet, traveller and man about literature - gives me news of the imminent arrival of my short story collections Knives, just published by his Iron Press. He assures me that the books have now rolled off the presses and will be ready for the launch next week. A book launch without books is a recurrent nightmare for writers. He assures me the books look great and I will get my copies very soon. We make an arrangement for him to drop the books off at Avril’s house, as he will pass close by it en route to Lancashire.

(Now! See the story on Avril’s blog (http://www.avriljoy.com/) about Peter arriving at her house with the precious boxes of books.)

I only have time to sniff the books with animal delight and run. (Why does one always sniff new books?) The books look beautiful, and - peeping nervously inside - I think the stories are enjoying their new livery. One box is carried in by our mutual friend, novelist and playwright Kitty Fitzgerald, who worked on projects with Avril and me at the prison. Kitty, beaming broadly, looks gloriously wild and Irish as usual.

I have to leave them enjoying coffee with Avril and rush home to see another visiting friend Jane Bidder, whose new novel The Wedding Party, (under her professional name Sophie King) is also out this month. Jane (still a prison writer in residence) brings her new husband and her new large and friendly puppy Jack, who had the silkiest black coat, impossible not to stroke.

But I am ahead of myself! Back to the gathering and the Forth on Pink Lane.

At the gathering I connect again with poet Marilyn Longstaff who has just returned from a writing workshop in Narbonne in the South of France which, coincidentally is not too far from Agde, where Avril, Debora (http://www.deborarobertson.com/) and I will stay during May and June to write like mad.

I’ve admired Marilyn’s collection Sitting Among the Hoppers where her poems - to quote poet Andy Croft - ‘…move effortlessly between the religious and the secular, between the domestic and the public, between preaching and entertaining. ..' Marilyn’s poems load up with fresh meaning every time I read them.

It’s good to see again poet Ellen Phethean who came into prison last year and read from her book length poem Wall – another great read based on a community residency in the Byker Wall housing development on Tyneside. Then I talk with Claire, a new writer who has a terrific idea for a novel and is buzzing with enthusiasm about it. I eavesdrop then on a conversation with Helen, an architectural artist (I think that was it) who will soon be building an art installation in Durham Cathedral. That will be a good thing to see. The cathedral is one of my most favourite places.

Then I have an interesting chat with Daneet Steffans, editor of Mslexia. We talk about the changing face of the magazine and its ongoing success in Britain and the wider world. Daneet, an American, talks of doing her GCSEs as a fifteen year old in London, her years in journalism in New York and the almost coincidental way in which she has ended up here in the North, doing this demanding job which she obviously relishes. People are full of surprises.

Then the room thins out, as many of the people are rushing off to listen to poet Kevin Cadwallender. Apparently the venue closes its doors at nine. Not wishing to risk a closed door we decide to go for coffee, then leap back onto the train home and – as writers do – discuss all the interesting people we have just met.

Essentially I work on my own and like it. Sometimes I might go for months without seeing other professional writers, apart from Avril who is a buddy, and Debora who is a daughter. This month seems sprinkled with writers of every hue and it’s been great fun.

Afterthought: would a good collective noun for writers be a Mslexia of Writers? What do you think?