Fragile Manuscripts and the Charm of Skellig

Behind me, as I sit here at my desk, are two shelves full of manuscript notebooks. These are fragile, precious things. Manuscripts chart the conception, process and completion of this whole, strange, imagined thing called a novel.

All writers have their rituals. I buy three bound hardback A4 notebooks from Rymans. Nice paper. £6.99 a shot. When the time is right I choose one of three ink pens ,and begin to write in the first book. I move from scribbles and doodles, sketches and phrases, first person riffs and place poems - on and on to coherent paragraphs and chapters. In the end there will be three or four hundred pages of writing and there might just be a novel that works. Fingers are always crossed.

On the soft brown covers of the books I paste pictures, to break their pristine touch-me-not demeanour. With my new notebook for At The Maison d’Estella - more about this on later pages – I have pasted a copy of an 1877 painting of a lady in orange lying on grass, her head on a cushion, a book in her hands. Her body is languorous, her face is totally absorbed. The painting is by Winslow Homer and is called The New Novel. I cut this image from a birthday card given to me by my friend Gillian. She is very good at birthday cards - presents too. She has a unique gift for choosing just the right gift.

I only ever write on the right hand side of the paper – so soft and easy to write on. When I was at school I thought how horrible it was to write on the skinny left hand side of the page. All I wanted to do was write on the right, easy side. (Perhaps it’s our duty as grownups to reward the child still within ourselves, by fulfilling these simple childhood desires). Then, as I work on and begin to revise and edit my first draft, the originally blank left hand side becomes full of arrows and balloons , questions and answers, speculation and self criticism. Looking back at these pages I can trace the convoluted thought processes that went into any one of my novels.


Some years ago I used to run a very successful writing group in my town. (It’s still successful without me around). Anyway, one time we asked writer David Almond to come and give a workshop and talk to us about his work. I didn’t know him then – except for his fine reputation as an editor and a short story writer - but was blown away when he showed us two bound books which were the typescript of the novel he’d written that was then hitting the literary headlines. It was a book called Skellig. He went on to show us his workbooks - which flowed with writing, scribbles, doodles, crossings outs, fillings in - which were the starting points for this book that went on, on to win the Whitbread Prize. The writers loved the notebooks. They reminded me of some of my notebooks and disabused me of my illusion that I had invented this method. 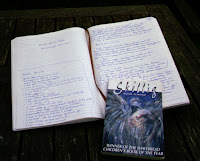 There was this other time David gave up his time to come to the prison and give a workshop for the women writers I worked with. After getting the women to imagine and invent around a series of objects produced from a velvet bag (the pastry cutter was very inspirational…) he went on the show us the visual drafts of the art work for his new book The Savage –a collaboration between him and the artist Dave mcKean. The Savage has a kind of dark energy. It’s a powerful collaboration of two artists with extraordinary imaginations and is a work of art in itself. I wrote a report for the prison of this and other events that were part of our Litfest Inside, which we put on as part of the Durham Litfest of that year. In this report, I gave David Almond the title of The Magician.

All these thoughts came tumbling back into my mind the other night as I watched – with a faintly possessive pleasure - the film version of Skellig. Since we first saw the manuscript we have seen Skellig move to become a prizewinning novel, we saw it come to world-wide eminence ( I was once in Colorado Springs USA and saw a window full of David Almond’s books, an experience brought a lump to my throat). And then Skellig was transformed into a drama for the stage, an opera for which David himself wrote the libretto, and now it is a film.

Of course a film and a novel are different animals entirely; I think it was Harold Pinter who put it very well, when he said that his screenplay from John Fowles’ novel The French Lieutenant’s Woman was a metaphor for the novel, rather than an adaptation of it. I like that.

In this film, Tim Roth is spellbinding as Skellig – dark, threatening, pathetic, revolting, and glorious in turns. The boy Michael, to my relief, remains firmly at the centre of the story. I rather relished the filmic cross-references - to the unique film Kes (with the pantomime sports master) and to The Snowman (where Skellig scoops up Michael and flies with him). And I was pleased that the beautiful shots of the house, the shed, the country and the sea, and the luscious music, underpinned rather than subverted the original central story.


Of course there are precious elements in any novel that are impossible to render in terms of film. In the novel Skellig there is this wonderful discussion about shoulder blades and angel’s wings which was so perfect and fragile it couldn’t happen in a film. But I did love this film. For me the most wonderful surprise was Skellig’s wings – scratchy and workmanlike, more pterodactyl than angels’ wings: not so much nativity play as a visceral link with the age of dinosaurs.

Good stuff. If you get a chance, watch it.

PS For some great stuff on gearing yourself up to starting a novel, look at Avril Joy's blog at http://www.avriljoy.com/