Should There be a Qualitative Distinction between Adult and Children’s Literature?

It’s an old discussion which has never really been resolved.

Of course, well written, perfectly crafted stories touching fundamental issues with poetic simplicity, published in the young-adult/children’s literature field,certainly should count as mainstream literature. Writers like Alan Garner, David Almond, Susan Cooper and Lucy Boston come to mind. Perhaps it’s the elements of magic so clearly intuited by  children and some special adults are a link between these writers.

This discussion means a lot to me. Written simply as novels, my first four books were placed by the publishers into the Young-Adult and Children’s Novel category. These novels were read and enjoyed by adults as well as children. In writing them I never saw then as any different from my later adult novels. I researched and told the story as it blossomed in my mind. I didn’t write them for ‘young adults’ or ‘children from eight to twelve years.’  For me they were just stories I was compelled to write. 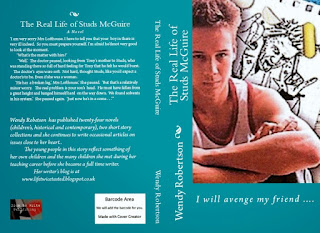 own books. I came across a novel of mine called French Leave, on the flap of which was the review of the earlier novel The Real Life of Studs McGuire. It was from Growing Point, then a prime review source for children’s books. It said  The Real Life of Studs McGuire states the urban dilemma fair and square in an up-to-date setting and through strongly contemporary characters...the action is swift and exciting enough to carry the message to th0se who read it,...
I like that, It reminded me of the joy of writing about Studs. This one was categorised as ‘Young Adult’...

Next I came across a novel of mine called Cruelty Games which was published as an adult novel. These are very different novels but both of them centre on the inner and outer lives of boys of sixteen and their impact on the lives around them. Interestingly my present novel-in-progress The Blue Pool, centres around Dee, an eccentric girl of thirteen and her impact on the people around her. It will be categorised as an adult novel,

Both Studs and Cruelty Games were  published by mainstream publishers and have been more recently republished by me.  I thought perhaps adults, young  and old,  might enjoy reading them and deciding whether they should be placed in and adult or young adult category.

Or any category at all?
Wx