Find out about The Pathfinder : New book trailer and special insights into the story 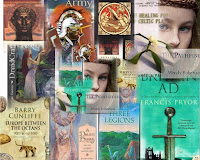 I dipped into my ancient Welsh Heritage and found a population of artists, singers,storytellers and path-makers and fighters - all reflections of my 21st Century preoccupations.  So-o  writing this historical novel was a very personal journey, full of joy. So I made this book trailer (click below) to let you know how much I have loved it.

In 383 AD a truly great love story blossoms between Magnus Maximus, the Roman leader in Britain - afterwards for five years Roman Emperor - and Elen, daughter of a powerful British king in the place we now call Wales. Magnus is fascinated by Elen, a gifted Seer and healer and a ‘pathfinder’ whose talented ancestors made straight roads in Britain long before the Romans.
As the Roman Empire begins to crumble the love between Elen and Magnus links the sophisticated Celtic culture, with its esoteric rites and rituals as  the pragmatic military culture of Rome now imposes Christianity on the known world.

Story Extracts for You

You should understand that as well as being born generations and trained as seers, members of my family have always been pathfinders – my father, Eddu, his father, Caradoc, and the grandfathers and grandmothers before him, going back seventeen generations …
… it was they who found the paths that criss-cross this island and the lands across the sea. I have learned that a thousand generations ago the pathways were slight, mere shadows in the grass, reaching out and up to the horizon ….
… my father has told me that, like him, task is to find the paths that lead to peace between the clans and tribes and to make this island whole …
… our family has the magic and means to deal with such malevolence and impiety. I learned early from my father - and then more perfectly from my seer* teachers - that an enemy’s malevolence can expose his weak side …
·       ‘Druid’
… the intricacy of the inherited magic in my family is reflected in the stories my brother lleu and our father’s cousin Bryn – both trained by the seers – would sing by the fire after the feasting.  My father Eddu and his grandfathers were seers. They were great kings whose wisdom and power has always been known throughout the islands. I myself have skills in magic from my schooling, although I’ve not been called upon to perform the pig- or mouse-changing caper …
… my first memory of actually using magic, as opposed to knowing and learning about it, was the time I turned a girl into an owl.

Elen: So we reach the dense Aclet Forest and, travelling along the far end of our own straight path – now paved over by Caesar’s men – we arrive at my grandfather’s house on the eve of his summer revels.
I feel at home when I see my mother’s birthplace, clearly the house of a great Chief with its fine round hall, its round lodges, its flower-strewn temples, its cattle and sheep pens and its storehouses for wool and lead. My nose itches at the smell of smoke and roast pig and burnt honey.
Snow leaps down to the ground and joins the other yelping dogs as they lead the way into the great shadowy hall. This is such a cheery place! Light spurts from torches lining the wall and the great central fire glints on the objects on the shelves around those walls. These are laden with family treasures of finely worked silver and gold -   beautifully wrought figures, cauldrons and buckets. The same light also flickers on the polished white skulls strung in a long line between the roof beams – the heads of the enemies of my grandfather. Some of these, I know, are those of his own grandfathers…

Later In Story
Quintanius: Now Magnus has the girl’s hair in his hand and the maid stands up to look down at him where he sits, a scowl on her fair face. He puts her rope of hair into her hand and for a moment it looks as though he might kiss her. There is the shimmer of threat between them. Haven’t I seen that many times? I feel tense, wondering if the maid has a weapon about her. These British women are fierce and not averse to fighting as hard as their men.

Amazon Star reviews of The Pathfinder

*****Magnum Opus, The past has never felt so real as in the last days of Roman Britain and the uneasy peace between natives and conquerors portrayed in Wendy Robertson's 'Pathfinder'. Heroine Elen is a beautifully drawn character uniting natives with the conquerors. Pathways lead in two directions and fey Elen's 'honeycomb' mind leads back centuries into the mists of time. But she is young and resourceful and her ordained path leads from her beloved coastal marshland of West Britain into Roman Gaul when the Roma nleader of Britain Magnus Maximus falls I love with the native girl, drawing her father and warrior brothers into his military schemes.

The book is filled with believable,fascinating characters including Aunt Olwen a drowned spirit, song-writer brother Lleu and Quin the faithful Roman devoted to both Elen and Magnus Maximum. It is a delightful, thought provoking read and I could not put it down. So many questions answered so many tantalisingly left. Elen has a future in her homeland and I want to know more.  ‘Erica’
*****Wendy Robertson is a consummate practitioner of the crossover novel, one foot in the 'now' the other in the 'then' but with this book she has planted both feet firmly on the same historical path and the results are wonderful. 'The Pathfinder' has allowed me to bury two of my reading bête noirs. One is that I don't like historical fiction, the other is that I avoid books that make me cry. However this book has confounded both of these prejudices. I loved the story, part fact, part fiction and I was genuinely moved - not manipulated- by the beauty of the writing and the incredibly sad but uplifting ending. 'Anne’

****This is an imaginative and convincing recreation of life in Roman Britain as the Empire crumbled. It reads almost like a fantasy novel, while being thoroughly grounded in careful research. ‘Helen’

***** What a treat! I have long been an aficionado of historical fiction, delighting in the sensation of living in another time and place. The Pathfinder transported me to a world of otherness, a world permeated by myths and mysteries, a world with vastly differing constructs of reality. Within this well researched novel I glimpsed not only the land of my forefathers but the people who populated it, people who came to life as they lived and loved in a country I know well but within a historical context I barely understood. Wendy Robertson is to be congratulated on her diligent research of a less well known era of British history, alongside her capacity to take the reader from a daily world dominated by scientific concepts of the 21st century to the magical ethos permeating pre and post Roman Britain. I walked in Elen's shoes. I observed through her eyes, I empathized with her feelings - all thanks to the skill of the writer.’ Judith Mary’

Press Reviews of my Work

‘A terrific read. A world on the cusp of change and we experience it intimately.’ Historical Novels Review.
‘A powerful writer.’    Mail on Sunday.
‘Wonderful…Robertson deftly intertwines two time periods, slowly absorbing one into the other through the remarkably likeable protagonist.’   Booklist USA.
‘A great storyteller… she weaves another tale with ideas that still resonate when the story’s over.’ Northern Echo.
‘Wendy Robertson is a rare breed – a writer with an exquisite gift for creating vivid, relatable characters.’ Scottish Daily Record.

Note: ‘ In The Pathfinder I have taken the available material and archeological history of late fourth century Britain and addressed the powerful pre-Arthurian myths of Macsen Wledig and the British princess Elen. My intention is to weave a story that has hope, truth and justice at its heart.’ Also I have used the word ‘Seers’, where others would have said ‘Druids’ to avoid stereotypimg
Wendy Robertson