At a recent reading group discussion on World War One Literature, a member of the group asked about women left behind by this war  and about their lives between the two World Wars.

I have recommended to her an excellent  book that I read last year, written by Virginia Nicholson. This fascinating book has resonance for the lives of present day women, who are inheritors of the lives of these World War One survivors in terms of aspirations, identity, careers and world-view.

It’s a very good read, well researched and very well written, as one might expect from a member of the Stephens/Woolf/ Bell dynasty.

To tempt you, here’s an extract from Lynn Knight's  Guardian Review here:  http://tinyurl.com/pahboyy 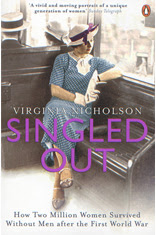 ‘... If, in the 1920s, she was likely to be the butt of Punch cartoons (some witty examples are reproduced here), by the 1930s, when reality had had time to bite, the Bachelor Girl had a whole shelf of self-help manuals to choose from, and a range of psychologists willing to diagnose her problems.

... Most singletons had to earn their own living. Domestic service and factories were the largest employers of women during this period. Clerical work was on the increase; teaching was a key occupation (during the 1920s, 80% of Oxbridge-educated women taught). With medicine and teaching among the professions requiring women to give up work on marriage, women who wanted to stay in them had their single status confirmed.’

I recommended it to this reader and I recommend it heartily to all intelligent readers of fact and fiction.