SHE WAS THERE ON VE DAY

Picture this:
She was there on VE Day

Flags festoon the bay windows and the grown-ups buzz  like bees and, the little girl thinks, they are laughing too much. It's all very worrying.
Something is certainly up today. There are even tables and chairs in the street with dishes of jelly and mounds of sandwiches. On old man is  sitting on a low wall squeezing songs from the wireless out of  his accordion, a bottle of beer by his side.
Everyone is dressed for Europe. This little girl is Holland. Her clever mother had transformed one of her nurse’s caps into a Dutch-girl cap with turn-back white wings. Her sister was a dressed for Spain with a flamenco skirt and her brother was dressed for America with a cowboy hat. 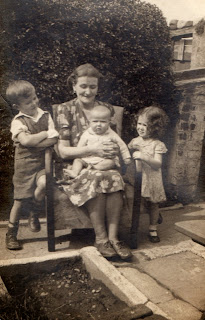 About that time this little girl began to know she was a writer.

'A little girl of three in a Fair Isle cardigan, playing outside a house in Lancaster. With her head of Shirley Temple curls she’s winsome, prettier than she’ll ever be in the many years to come. She’s chalking on the sill of the big bay window.
She stands back and looks at the zig-zag scribble. That looks right. It looks just like her mother’s writing, when she writes her letters. But then the little girl frowns her characteristic frown. Are the squiggles all in one or are there breaks in the line? She runs inside and climbs up to the mantelpiece where she knows there are letters. Letters and envelopes are big in her house these days. There are letters from her Daddy who’s making aero engines in another city. Mammy reads these out to them all, the four of them sitting round the table. The letters always end with Love, Bill.
The little girl likes the way her mother smiles as she reads them. But there was one letter that made her mother cry, about someone called Jimmy, whose plane crashed in America. There’s a photo of Jimmy in uniform on the mantelpiece, a sharp face with smiling eyes under a peaked cap.
Now, the little girl takes one of her Daddy’s letters and looks at it carefully. Ah, yes! There are gaps between the squiggles. So she goes outside and - with the corner of her cardigan – knitted by her Auntie Louie who once told her a tale of swinging a milk can – the little girl rubs the sill so there are now spaces and it is real writing.'

From my memoir The Romancer