The Need for Writers to Escape from Home.

A lifetime of writing and working from - and at  -home compels one to live a domestically-oriented life even if – like me – your are definitely not domesticated.
Possibly this is less so for men – think of Roald Dahl in his shed! Dylan Thomas  in his Boathouse!  But then there’s Vita Sackville West’s Sissinghirst tower isn’t there?   So my sexist theory doesn’t quite hold, does it? Perhaps class counts more than gender.
Over the last twenty years, as I have worked (quite hard)  from home, my desire to ‘get away to write’ has become part of the creative pattern of my life. I go away from home for refreshment, for inspiration, for separation, for research. Whatever the reason I have no doubt at all that every time I go away my productivity doubles and my inspiration deepens.
More than ten years ago I won a month’s stay at Annaghmakerrig, in Ireland’s border country. I sat there in a small room (haunted, but that’s another story…) and wrote for a month in the great company of other writers and musicians. In that time I completed the first draft of the 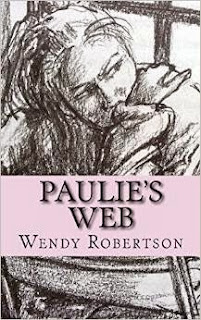 book which became my novel of women emerging from prison,  Paulie’s Web.    While I was there I also met a funny, clever, American playwright and actor. Only recently my memories of him produced the essencs my character ‘Tom’ in Writing at the Maison Bleue, my most recent publication.
Going further back in time, it was at Arvon’s Lumb Bank where I met the luminous Irish writer the late Joh McGahern. At than time I was moving on from writing young adult novels to the wider – although never say greater – field of long adult fiction. I was feeling vulnerable at the time. This feeling of uncertainty still pursues me. Part of being a writer, I think.
John read a slice of the novel which was to be my first adult novel. ‘Oh Wendy!’ he smiled ‘Sure you’re a great writer? Don’t you know that?’ He went on to compare the dilemmas of writing fiction based on one’s own life experience, ‘But then,’ he paused. ‘Aren’t there some things even then that you would never write about? An interesting question. He did tell me of an experience he wouldn’t write about. But I’ve never ever told anyone what it was.
The novel I was working on that week went on to win me a three book contract and effectively launched my professional writing career.’
Moving on, there was the year I went on a workshop led by Helen Carey on the magical Greek island of Kythera, where the ‘celebrity’ writer was the Hellenophile Louis de Bernières who was very popular with the retreaters.
I was pleased there that Helen kept the taught workshop element to the very minimum. I stayed in my apartment by the beach  and I wrote sketches for short stories. Much more important than this,  was transfixed by the sheer presence of the island itself, its history  and the blue sea at its edges.
All these years later I have discovered the poet Marc Morday who was at a workshop on Kythera and was also moved by its beauty and its presence. (See his very special poem at the end of this piece.)
Although my experience of Kythera was more than a decade ago, the island bedded itself down in my consciousness and is just now emerging as a setting for the beginning of the new novel on which I am working which opens there on that island in 1941. I just need to go into my head and open a door and I am on that island again.
Of course In between all these more organised retreats, you can make your own retreat experiences. I do this on my own but also with my writing friend Avril joy. We have  been away ‘off writing’ many times through the years on retreats that might be as short as two days or as long as two months. This longer retreat was in Agde in the Languedoc, my favourite place in the world. It’s a  place on many time levels: a place which has inspired two of my novels An Englishwoman in France and,  most recently Writing at the Maison Bleue.
Of course for Writing at the Maison Bleue I have drawn- albeit in pure fiction - on my experiences of creative retreating for writers on various parts of Britain and out there in the world.

The dramas, dangers and changes in a hothouse atmosphere of the companies of strangers in a place remote from your daily life places you uniquely on your own. You find out more about who your are and what you want to write.
I have seen people grow and change before my eyes. They write. They change; they fall in and out of love, they discover new sides to themselves, stimulated by the fellowship of other writers. And it’s not just writing. I led some mature students on Education retreats in Germany who ended up in tears, disillusioned now with their distant home life – their whole lives turned round.
Willy Russell observed this phenomenton very well in his plat.Educating Rita. .
Many of these retreats are in remote, often beautiful places. This for me is particularly true of the Languedoc. And the islands of Kythira and Cephalonia are still there lurking in my imagination and continue to inspire me in my writing.
I am now researching a new novel which will be at least initially set on Kythera against the background for the tumultuous Battle for Crete in World War 2. It is taking a lot of reading and thinking imagining and empathising.
And perhaps I might have to go there again. Oh dear!
So I would urge any aspiring or experienced writer out there to try this thing and go and write with strangers in a strange place. You can call it a ‘holiday’ if you like. But don’t take any baggage from home – personal or relational!
My experiences, bedded down in my imagination, sinking into the strange soup of my subconscious  have ensured that - while living in the same house for more than thirty years  I am able to be bold, and  write my novels on wide ranging themes set in a wide variety of places,. It keeps me fresh, it keeps me inspired to continue to write new novels set in places that inspire me about people who intrigue me..
And I have not needed a shed, a boathouse or a tower to free me from any restricting domestic pre-occupations or routines.

Kythera, to be precise.


That I could live,


in a little town


where the Greek coffee


and where some of the men


of this small town


to chew the fat


as the honey streaked sun