Half Way Through: Ten Tips for Editing Your/My novel

'The most difficult task for a novelist is the movement of people between time and place.'

This deceptively simple statement occurs to me every time I embark on some heavy duty editing.

For me beginning a novel, involves researching, thinking, imagining, writing sketches, making bubbles of action and linking them into some kind of loose structure. It involves collecting images, drawing people and pictures, making maps (see my post about Mapping the Imagination).

So now, I’ve just finished the half-way-through-edit and here for you  is my new list of

Top ten things to do on a half way edit.

1.     Gradually recognising and refining your own style (always learning …)

2.     Establishing the strong foundation on which you will build the rest of the novel

3.      Inserting earlier the significant detail now emerging in the narrative.

4.     Reinforcing time/place where it seems useful

5.      Ensuring consistency in place and characterisation

7.     Changing, evolving and establishing names as characters reveal themselves

8.     Recognising and endorsing the significant characters and points of view

9.     Ensuring that the structure is doing its job for the reader. - This could include the way the
chapter and part structure work 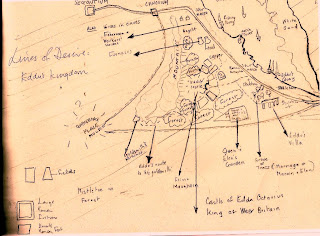 After that at last you (and I!)  can think forward to the second half of the novel. For me this means more thinking, more imagining, more images, and … er … another map…

I thought maybe you’d like to see some Work in Progress
… Lleu raises his hand. I close my eyes and think of the statue of Branwen in the centre of the pool in my father’s house. Then I raise my hand and, side by side, Lleu and I begin, steady step by steady step, to walk on fire. We do not hurry.  The crowd breaks into great applause as finally we leap back onto the grass at the far end. The old priest, still standing there at the end of the fire pit waves his staff across us and sings a blessing. I am filled with energy and delight and smile broadly and wave at the great circle of people there. Lleu holds up his arms in a victory salute. The young stick fighters beat their sticks against each other making a rattling rhythm. A pipes-man squeezes out a few notes. Another man makes his elk horn pipe squeal.
Lleu smiles and shushes the crowd. ‘Would any here like to walk the fire as do my sister and I?’ He grins broadly at the chorus of groans…