Artistry and Playfulness Move Through The Fair 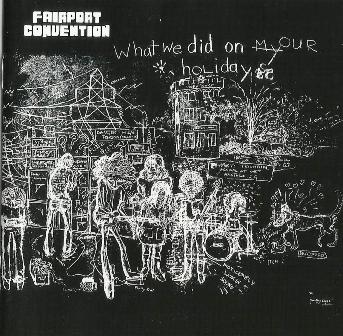 Juliet recommended Sandy Denny singing it with Fairport Convention. She has the ‘60s LP. I checked it online and found it at a sky high price in Vinyl far beyond my modest writer’s means.
Then Juliet put me onto the re-engineered CD, well within my means. This features She Moved Through The Fair, sung by Sandy Denny - alongside great songs written and performed by the group and with the addition of iconic songs by Joni Mitchell (Eastern Rain) and Bob Dylan (I’ll Keep It With Mine).
I relished Sandy Denny‘s version of She Walks Through the Fair. Sung with elegant power and mystery, it is different again.

Then on the tenth listen to this version I realise that in verse six is singing:
…I dreamt it last night that my dead love came in
So softly she entered her feet made no din
She came close beside me and this she did say …

This, of course reflects the dynamic nature of such traditional songs. Not only can they be re-interpreted, they can be re-worded.

But I very much prefer the dear love version
I did think the use of dead love  was a pity here. It’s easy to know from the more original versions is that it is a song of love and death, but in these the death part has to be inferred by the listener which increase the subtlety of the song, enhancing the enigma and the ancient significance of the words.
Still, Sandy Denny delivers the song superbly on this CD.
Thank you Juliet.

It seems that in about 1968 Fairport Convention were playing a gig at . ‘We were given a classroom as a dressing room…some members, probably and Martin started to do a caricature (on the board) … it grew and grew … all the knobs on the amps, the names the voltage wires…’
They moved on, but later needing a cover for their new album they sent someone to photograph the board before the cartoon was rubbed off.
The artwork here reflects the  intuitive artistry and playfulness characterised the style and freedom of the music world in the '60s and '70s before the profiteering puppet-masters got the industry by the jugular.  Part of this was the playful, sometimes surreal, creative crossover between art and music, between music and lyrics, between art school students who explored their new freedoms in music and young audiences who recognised their own world and concerns in the new lyrics.


Words, Writing and Art have gone hand in hand in my own world since then.

Though no great artist I do draw and paint and once had the privilege of teaching art in school.
I tend to use art analogies when trying to explain my writing process, talking of blocking in a large canvas before the start of a novel; adding colour and a depth field to a character.
I also work at the intricacy of my novel through building collages which spread across my study wall with a life of their own. And there is music. I describe myself as ‘on song’ when the writing is flowing and I am creating prose about the people, places and actions – living in a world that moves and lives before me.

In the case of my new novel my moving world is very ancient, plucked out of a non-recorded world where my collages drip with ancient maps and old cloth, with images of beautifully wrought objects handled by my people, with speculative images – some drawn my me – to feed my imagination.
I also feed that imagination with the ancient myths that came down to us through song and spoken story, trickling down from then to now.

One such song is She Moved Through The Fair.