' ... Lleu unpacks his harp in the sunlit door space of his mother's weaving hall. The women look up and smile, then duck their heads back down over their shuttles. His mother smiles to herself but keeps her eye on her own warp and weft. One woman winks at him and asks him if he wants her to weave her yarn through his harp strings. 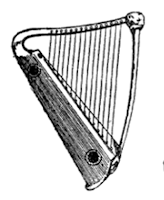 He grins at her,  cradles his harp in his arm, and begins with  the first song of a repertoire acquired in the school across the water – always plucked and never voiced. As these songs without words float over them the weavers begin to feel in their bones the stories of the sun riding through the heavens by day and the moon quietly waxing and waning by night.  They celebrate the grace of the star goddesses who can tell the past, the present and the future. And they feel the world around them swirling and dissolving, then remaking itself in the magic power of water.
Lleu plays on and the plucked notes of his harp fall into rhythm with the clicking of the weights and the swinging of the shuttles. Soon the women start to hum along in sweet unison and the hall becomes a bee-hive, buzzing with voices that thicken and rise above the click and swish of  their weaving frames.
When the light fades and the women return to their own houses and families Lleu brings his harp closer to his mother and, now in words, he  sings the story  of her sister  Branwen the dark menace of  the great Arawn, who grasped her one day and towed her into his Underworld.'
Lleu’s words float up into the smoke blackened roof beams . His mother  joins her humming voice to his, her own song without words keening and full of sadness.
There is no doubt that Lleu is her favourite child: she sang to him from the day he was born and soon after gave him his first harp, strung with a single string for his little fingers to pluck...'

Note for you: Lleu is the son of a Welsh King and the brother of Elen who is at the centre of  my new novel.  For a writer this is a fine adventure - bringing people to life from seventeen hundred years ago. ..
Posted by Wendy R at 15:32