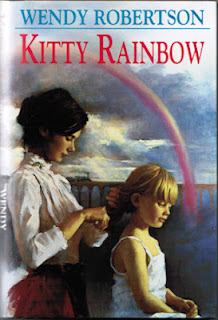 The creative spring of a novel (as this marathon sequence is showing) emerges from many parts of a writer’s experience .

One night I had this vivid dream.

I was walking by the sparkling River Wear in field beside a great historic railway viaduct - one of the earliest in the world. In the air above the viaduct a rainbow appeared. I was suddenly aware of something falling on me from a great height. I put up my arms and into them plopped a baby, warmly wrapped (I nearly wrote there in swaddling clothes...)

Now I do dream of babies now and then. I think they're  symbols for the stories that keep popping out. After all what is this marathon but a celebration of my twenty three novel-babies?
Then the next day I woke up with the name Ishmael Slaughter  tumbling from my mouth. I said it again. Who would have such a name? By the end of the day it was in my mind that this was a very big man, a craggy man, who had once been a bare knuckle fighter. Suddenly it came into my mind that it was this man who raised his arms under th viaduct, it was he who in the story will grasp and save  the baby.
Then my husband – who never misses the Births and Deaths column in the Northeen Echo turned to me and said, ‘Here, Wend! I have a good name for you!!'  He reads: ' “the death of Kitty Rainbow, sister of Bunty” ’ Of course this sweet man had lived with me and experienced my long search for interesting, meaningful and significant names for my stories.
Inevitably there followed much research, not least into the history of bare-knuckle fighting – but out of all this came this novel Kitty Rainbow.

The Story
Ishmael Slaughter calls the baby Kitty Rainbow and fosters her with the strange drunken shopkeeper  Janine Druce. Kitty’s greatest love is for her adoptive the aging boxer who is the only link with who she is, where she came from...

From near the beginning:
Ishmael looked down at Kitty’s battered face, her ragged clothes,  and her bare feet, arched too high and turning slightly inward. He stroked his beard and frowned at Janine  ‘i’d have thought the shop’s doing all right now, Janine Druce. Alright enough ot put shoes on thios child’s feet. His voice was soft, its articulation very distinct, ‘These are prosperous times. Those cotton men may be laid  off in Lancashire but the collieries and ironworks are going full pelt across here.  There’s money enough around for fancy clothes…’
His glance dropped to the child, 'Come here Kitty Rainbow, so that I can see you properly.’ He turned Kitty round towars the gauzy light coming from the window, The hand on her shoulder was light as a feather, as big as a frying pan, He peered into her battered face and his knobbly fingers grasped her more tightly. ‘Have you been doing this, Janine? Good God!’
‘I telt yer, Ishmael. She gets into fights.’


From  near the end:
Among other adventures as she grew up Kitty Rainbow has become a respected shopkeeper in Priorton.  Here she is in Edwardian London with her theatrical friend Esme:


‘Just one thing.’ Kitty reached inside her jacket and pulled out the cornelian pendant, rubbed it with a linen handkerchief and let it fall. It glowed softly against the black broadcloth,

Esme grinned. ‘Ha! Putting out the flags are we? Telling the lovely Willian we’re all at home?’
Kitty shook her head. I don’t know. I was horrible to him last night,’
‘Why?’
‘I don’t really understand.  To tell the truth all the time I’ve been here I’ve hardly thought about William at all, just Leonora and Ishmael. When he came to Merridew court last night he seemed like a stranger, And the two of them, him and that Hunter fellow, they loomed up out of the alley and I thought of this man who’s …’
Esme put an arm around her, ‘Nine day wonder, these murders. I’ve told you. Things like that happen round here. You have to harden yourself to them.’
Kitty shook her head again. ‘I’d never get used to them. All I want is to be back in Priorton. Back behind my counter, planning for the new shop.
‘There’s wickedness in Priorton too,’ Esme objected. ‘Murders. Beatings. Remember I grew up in the Royal George. And I’ve lived with Jarrold. Always in the edge of such things, he was.’
Kitty glanced at her. What had made Esme think about Jarrold?  Was she making a connection between Jarrold and these murders?
‘I wonder where Jarrold’s got to,’ she ventured.
Esme shrugged. ‘Signed on for some ship to America I should think. He mentioned America in the note, didn’t he? Always wanted to go back there, always.’


USEFUL NOTE: KITTY RAINBOW turned out to be the first of a trilogy.


I didn't quite know that when I finished it.

Scroll down for the Priorton Map and for inside info on
Riches of the Earth, Under a Brighter Sky,
Land of your Possession and A Dark Light Shining.