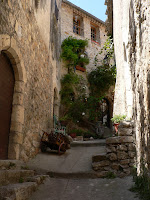 It's lovely to be at the final stages of editing a long novel  but it can make your head hurt. At this point you have to juggle in your head with the ongoing narrative, the whole cast of characters, the themes, the atmosphere, and the setting all at once. But as well as this you have to make narrative flow, clear the undergrowth and retain its complexity, while allowing your readers true access to your meaning.

It occurred to me on this edit-run how important is the symbolism of food  to this novel; how meals can bring all these head-hurting aspects together.

Early in the novel American Tom Roache  surveys the table:

Tom looked up from his delicious porc aux cerises and surveyed the long table in the cloister. Ruthie Dancing was sitting at one end with Jonathon Tye to the right of her and the dark Spanish- looking boy in the washed out T shirt on her left. Jonathan was ignoring his hostess and concentrating on the plump feline girl on his right, whose eyes had flickered across to Tom more than once.  Here’s a chancer, Tom thought.


Ruthie was deep in conversation with the boy.Tom wondered about the boy:an unusual sort of guy for this kind of writing malarkey. He looked out of place and was therefore infinitely more interesting than anyone else around the table. Tom sometimes thought that gatherings of writers could be rather samey. He’d been to a few in his time: they could be drenched with cynicism, spite and the disabling atmosphere of people watching their backs.

Further down the table was the thin Englishwoman who had snubbed Tom on the plane: apparently she was a poet, name of Mariela. At this moment she was glumly working her way through what looked like porridge in a wonderfully bright blue earthenware bowl that had been brought down the courtyard, with some ceremony, by the Frenchman, Serge, who had placed it before the poet as though it contained pearls of great price. Serge was sitting beside her now, enjoying his own Porc au Cherises, chatting away to the poet. Tom could not tell from this angle whether or not the woman was responding.

Beside Serge sat the old lady Francine, who was deep in conversation with Aurélie LeBrun. They were talking in French and Aurélie was laughing and nodding. She was still wearing a rather distinguished chef’s apron and the fair hair that had escaped from her severe chignon was hanging in baby curls round her face.

Tom was fascinated by Aurélie. She was deeply attractive. But, having been bitten a couple of times in recent years, he now steered clear of attractive, mature women. Some of them, daughters of women of liberation, had been bred to believe they could and should have it all. Having it all – in the case of two fine women of his acquaintance – had meant owning his heart and creative soul as well as that of their hapless husbands. Having been stuck in such ambiguous mud a couple of times, these days he chose to stick to friendship. And women did  make fine friends.

Now, he appreciated Aurélie le Brun's grace as she stood up and gathered in the plates - helped by the boy Joe - and informed people they should retain their knives and forks.

At that point Serge LeBrun vanished down the courtyard and returned with a custard-yellow cheese - the size of a small wheel - on a board in one hand and a smaller white cheese on a blue plate in the other. He placed that before Mariela, the large cheese in front of himself and, without asking, cut everyone a slice and passed them around on small plates.

Tom didn’t care for cheese but, minding his manners, he took a nibble. It tasted tangy, salty in the middle and sweet at the edges. He found himself eating the lot, nibble by nibble. Aurélie returned from the kitchen with an apple tart the size of a bin lid. They ate their tart ate off their cheese plate, gathering crumbs of cheese enhanced by the sweetness of the apple. Serge brought a large shiny apple for Mariela. She looked at it resentfully but still took a very small bite, then another. Then another.

Just as Francine was taking her last dainty bite of the apple tart Aurélie tinkled her glass with her spoon and nodded towards Ruthie who resisted the pressure to stand up. Everyone looked at her expectantly. Jonno’s chair creaked as he sat back and folded his arms. The girl Abby smirked at Tom who raised his eyebrows, stern faced.

‘Well,’ Ruthie folded her napkin. She looked at them, from one face to another. ‘I suppose I should say something. I’ve welcomed you all individually and now I welcome you as a group. First, I’d like to thank my partners Aurélie and Serge for launching our retreat with this delicious meal.’ Tom led the patter of applause. Serge grinned and gave a vaguely military salute. Aurélie bowed her head gracefully.

Ruthie went on. ‘It’s great to see you here by the cloister talking and eating together, getting to know each other. I decided we wouldn’t to that awful thing of speaking about ourselves one by one. I’ve always hated that myself so can’t see why I should impose it in my own retreat.’

‘Bravo!’ said Francine quietly. And others round the table nodded and smiled. Except for Jonathan, whose glance had wandered across the courtyard up to the house and then further up to the wide blue sky. Tom thought he was either bored or embarrassed: hard to tell.

Aurélie and Serge were standing now, back from the table. Aurélie smiled. 'We do have some simple rules about the domestic arrangements.’  ...

‘I do have one question,’ said Tom Roache, looking straight at Aurélie . ‘Just how did you make the pork so very fine? I have never tasted such delicious pork.’

Aurélie beamed. ‘Thank you Tom. Me, I am not the  writer but I will write it down specially for you.’ Her gaze met his and for a moment he forgot hus good intentions about mature women.

Later that night the recipe turned up on the table:


Season the pork well with salt and pepper. Warm the olive oil over a medium high heat in a large casserole and brown the meat all over, then remove it from the pan and set it aside. Reduce the heat, add the onions with the bay leaves and thyme and sauté until soft and translucent, about 15 minutes. Add the garlic and stir for another couple of minutes, then add the sage, honey, soy sauce, balsamic and wine or cider. Give it all a good stir, then tip in the fruit and return the pork to the pan. Bring to a simmer, cover with a tightly fitting lid and cook gently over a low heat for about an hour and a quarter. Keep an eye on it. You might need to splash in a little more booze or water halfway through, though I didn’t. Serve the pork cut in thin slices with the sauce spooned over. The pork is also excellent the next day, cold, and sliced into salads or sandwiches.

I know! I know! It's not perfect, but it's getting there...Wx