Imagination 3: Down The Rabbit Hole 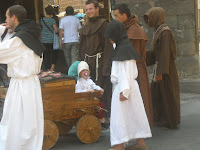 Curiouser & curioser.
Or It's a poor sort of memory that only works backwards. Lewis Carroll
What a great novel is Alice - a world where a girl tumbles through time and space by means of a rabbit's burrow or that very mysterious and terrifying thing - a mirror; where a cat's smile becomes its own whole self; where being suddenly small or suddenly large is thrust upon you without your willing it; where a queen can be a devil and irrational executions are the norm; where bad and good and strange and comical dreams tumble over each other and assault the senses.
Lewis Carroll, a mathematician, is an example of one of those scientists to explore the creative vision, whom I mentioned in my last post (Below). For an expert in that most rational discipline of mathematics to create Alice's successive strange worlds is a wonderful illustration of the notion discussed there.
Interestingly, few people recall Carroll's mathematical papers these days whereas Alice is thoroughly embedded in our national, if not our international, subconscious.
When I recently was reminded of Carroll's notion that 'it's a poor sort of memory that only works backwards', my bones shivered with agreement because I often think that I remember the future.
There is a crazy logic to this, if you take on board the notion - as I have - that time is not linear. Rather it is like a spinning top or a whirling dervish, where one gets glimpses of things past and things future by the accident of the spin. If you catch glimpses of places and people in the past or the future, they - by definition - can catch a glimpse of you. It may follow that you can glimpse yourself in another time, another place: in the past or in the future. Hence 'remembering' your future. The why and how of all this are inaccessible to conventional logic. It is a matter if intuition and insight.
So far, so unscientific. Or, as some might say: so far, so crazy.
But is seems to me that the only way we can express this concept is to weave it into fictional stories that are seen as surreal, magical, or perhaps coded psychological metaphor. Look at Lewis Carroll's Alice novels. Look at Charles Dickens' A Christmas Carol (Carroll? Carol? There we go!) Look at Henry James' Turn of The Screw...
Curiouser and curiouser...
A propos, my next post will be a passage from the novel I am currently writing (At The Maison d'Estella) where I am trying to loop together some of the mad stuff above into my own narrative of strange events in the life of Starr, my central character.
wx
Alice Afternote. Curiously, just now on Australian Al's interesting blog there is this wonderful photograph of a river forcing its way through a man-made tunnel (part if a lovely gold rush story...) In the photograph you can see the light at the end of the tunnel. This made my mind leap straight to Alice as she made her way down the rabbit hole.
Only connect!
w