Imagination 2: You are not the only one 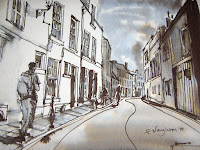 You may say you’re a dreamer, but you’re not the only one… John Lennon.

I used to think that the imagination was like the soul. You knew it was there but you could never find it in any physical form.

But a few years ago I was asked by novelist/psychologist Charles Fernyhaugh* to join a conversation about a possible research project investigating what happens in writers’ brains when they write – which parts of the brain becomes active, which remains blank. The project didn’t materialise, probably because of the prohibitive cost of the machinery involved and the lack of funding. I have to admit that it was fun for a while thinking of us writers as highly informed lab-rats. It would have made good copy for a novel.

It was one example, however, of scientists making an imaginative leap to further knowledge. Developments in science and technology are littered with Eureka! moments of high imagination, where unlike elements are put together to propose a new truth, a new concept, a new way of looking at things. Often these are come upon by scientists prepared to take a creative risk, or artists who take on the disciplines of science. Think Leonardo da Vinci. Probably some keen academic is busy making a list of such perfectly rounded people as we speak.

I was nine when my father died but in my imagination he was just such a man. A gentle soul, he was a skilled electrician who loved to read. In our cellar in Lancaster he put things together that made new sense. He invented his version the ballpoint pen. He used brown wrapping paper to make up books of cartoons with sewn spines. Later, after he had died, one member of my family called him a dreamer in a disparaging tone.

Perhaps it is genetic. In my early years I was called Dilly Day Dream. I remember one day trying out the idea of walking the mile home from school backwards. Half way there I got sick of doing it and turned round, only to smash into a lamp-post.

I used to read books that were far out of my league in terms of context and experience and imagined my way into those exotic worlds. I wrote stories which I myself made into little books with sewn spines. And hid them. It was a very private world.

I talked to people who weren’t there. I rehearsed conversations that didn’t happen. I lay in a high place in our local park and watched the people far below, small as bees, and made up scenarios of their lives. Without knowing it I was creating my own apprenticeship as a writer, developing my imagination muscle to the point where it has become a professional tool.

But I was doing something else. I was escaping what was - for a time - a hard, dreary and colourless life: a life that involved estrangement and bullying. My inner life was my protection.

Similarly this inner imaginative life can contribute to the survival of people who are confined. The poetry and writing of prisoners is an escape into their imagination, away from the depersonalising routine of incarceration. One woman I worked with in prison wrote ‘I remember the time I was living with my Grandmother in Jamaica and the good time we all have together when I was growing up. I look up at the blue skies and the sunset is the most beautiful. I remember lots of moonlight and the green grass and the trees. And that time my grandmother said to me, ‘Shirley you must remember this all your life...’

In life, as in prison, dreaming and imagining are crucial survival skills.

wx
* His site
(Painting of Pale Street by Fiona Naughton http://www.fionanaughtonartworks.com/)
Posted by Wendy R at 09:46