The Holocaust Survivor and the Little Children 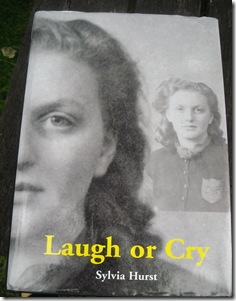 Like many who grew up in the years after the second world war, the events and outcomes of that war are hard wired into my intellectual system, providing markers for the nature of virtue and evil that survive in me to this day.

At the time my childish mind grappled helplessly with reportage of  the terrible acts that could only be called evil. Later in my life I read and studied more about the war and was able to contextualise, if not bury, such horrors.  Even so, it’s been necessary to  revisit these deep feelings regularly as the anniversaries of the war have rolled out in the half century between now an then. And this week again the newspapers and media are full of it, focusing on the significance of the seventy year anniversary of the declaration of that war.

All this has brought to my mind an event earlier this year at the small library in  Spennymoor where I chaired a discussion between eighty-seven year old Sylvia Hurst and a large group of child and adult readers. Sylvia was there to talk about her autobiography Laugh or Cry  which recounts her life before and after she escaped the Holocaust in 1939.


The children of Ox Close School – bright faced and interested -  reminded me of myself at that age. Bizarrely, it was Red Nose Day, so they streamed into the Library in fancy dress, red and green hair sporting painted faces. Some girls wore party dresses and pyjamas. Some boys came in football shirts. They, with a sprinkling of adults, were there to meet Sylvia Hurst, nee Fleischer, who as a young girl, escaped Nazi Germany on the last train - the kindertransport – sent by their families to safety in England as the war clouds were gathering.


In the library the children sat in orderly rows on  mats and listened as Sylvia spoke eloquently of her happy pre-war life as a member of the loving family of an affluent corset maker, who so believed in Germany that he refused to leave. In the end, like his wife - Sylvia’s mother who loved haute couture – he died with other members of the family, in extermination camps.  Richard, Sylvia’s younger, thirteen year old brother, had also stayed. Mr Fleischer thought the kindertransport would be too dangerous for him. Richard was taken by the Nazis but survived the camp to which he was sent.  Sylvia told the children, ‘You know, those living skeletons you see in the pictures? He was one of those the end.’

But now she reassured them  that - in his eighties now - Richard lives in America and has had a long and fulfilled life.

Sylvia, at sixteen, was too old for the kindertransport, but had escorted younger children so far, and by some blessed error, was allowed to continue.  After a hard journey Sylvia arrived in England where - her pristine German sense of cleanliness offended - she first lived in a flea-ridden house in the East End. Then she went to rather reluctant relatives to live with them and work in their factory. Later she she went on to be a successful West End dressmaker and designer, then on to lecture in Manchester on fashion design, and finally she moved up to Tantobie in County Durham, where she  ran her own pub and restaurant.

Sylvia sat there in the library  full of energy and occasional laughter as she told her tale. She had combed her once blonde, now grey curls down over her shoulders because – she told me - she thought the children would like it that way, see her as a heroine or a princess…


Still, you might think this was heavy duty material, for ten year olds! But these children had been prepared by their teachers, having read appropriate  material and looked  at an  Ann Frank exhibition that  was touring at the time. (I have to admit I stifled a thought that the horrors of the Holocaust had been tamed by being ‘on the curriculum’.)

But these children here asked wonderfully searching and insightful questions, drawing even more  extraordinary  information from this unique lady. Subjects ranged from brainwashing, to haute couture, to the kind of things Sylvia had chosen to put into the the single suitcase she was allowed to take on the train. (Her father said she could choose any suitcase to take with her. She chose a fine crocodile skin case, which she later regretted because it was so heavy!)  The best question for me was the girl who asked what it felt like, to go through all this.

So Sylvia  in her still strongly

accented English,  described again the joys of secure family life in pre war Germany  being shattered by inhuman, shameful events that no child – so person – should endure. As she spoke she used examples from the children’s own world here and now to illustrate her loss and her suffering as a child.

It felt to me like magic, then, as these children used their considerable imaginations to enter the world of this lady -  seventy six years their senior – and grasped something of her extraordinary life. In this way they transformed their technical understanding of a bit of the history curriculum into genuine empathy with someone who had lived it.


In the tea break that followed , one by one the children came up and cuddled this old lady, almost as though to comfort the little girl - not much older than them - who had been left alone and had lost her family in the Holocaust.

Email ThisBlogThis!Share to TwitterShare to FacebookShare to Pinterest
Labels: Holocaust