The Evolution of my crossover novel, LIZZA

I have been working with my great friend the literary academic Donna Maynard on an archive project, which she hopes will link my hundreds of notebooks with the succession of novels which have been published over my name in the last 50 years. The process will take a year or so but should prove interesting.

We began by considering my first published work – Theft, a children’s novel from 1972, published by Corgi Transworld (Scroll down to read a post here called ‘The 50 Year Novel.’)

And now Donna and I are considering Lizza, my young adult novel, published in 1987 by Hodder $ Stoughton. We examined both editions: of Lizza - the hardback and the paperback editions.

First, we look with fresh eyes at the hardback cover - illustrated by Steve Braund. I admire it for its sensitivity and its own storytelling arc. 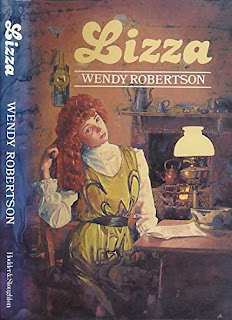 Then we compare this with the cover of the paperback which, as you can see, is much sharper and more modern, but still very appealing and charming in its own way. But after forty-five years, although I remember the novel very well, I had almost forgotten the details of the covers. 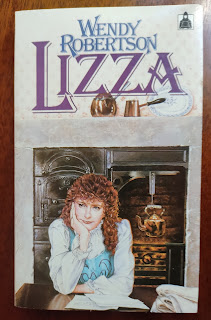 Now a frisson of shock ripples through me as the details of these covers remind me of myself at the particular time of writing.

On the hard-back edition, the biographical blurb reminds me of myself at this time in 1987: a younger self that bedded herself deep into the background of my present day.  life. Here - in the words of my first great editor, Anne Williams - is what the cover says about this young, aspiring writer:

“Wendy Robertson is senior lecturer in education at Sunderland Polytechnic. She has been writing since she was 16, but because of a full-time career much of the writing remains unpublished. In 1973 her first novel Theft was published in paperback k by Corgi Transworld and for several years she also wrote a weekly article on a variety of subjects for the Northern Echo and she has published and she has had several stories published in magazines.

"Wendy Robertson lives in a Victorian house at the centre of Bishop Auckland, County Durham, which he loves because yours is obsessively interested in what she calls ‘the past in the present. What is reality and what is fantasy can never be disengaged,’ she writes. ‘In my writing I take this a stage further placing my magic imagination at the service of the basic story which may be a well-rehearsed refrain. She is married with two grown-up children, a boy and girl.”

Dear reader, I still live in that same house. Lizza came out  forty odd years ago and this statement was very true of my life at the time, which was a combination of a very committed family life and a very intense working life, where my long-term lifetime commitment to writing had to be squashed in around college vacations, transporting children to their schools, visiting museums and art galleries for my interest and for their education. Also at the time I was involved with the early stages of Women’s Liberation.

And so it was that with the publication of Lizza by this major publisher I was finally given permission to acknowledge that I was indeed a writer which would allow me at last to place the writing of stories to their proper place at the centre of my life. (Lizza - a so-called 'young adult' novelm- proved to be my crossover novel between children's fiction and adult fiction.)

This meant tailing off my work in higher education, where I had learnt a lot and which I had really enjoyed. In reality I still went on to sustain my commitment to education in that I transferred this to the running of writing workshops and a commitment to mentoring new writers

But always at the centre of my life were my long novels, which I went on to complete at the rate of just about one every year for the next couple of decades. I had certainly become a novelist.

One interesting thing about this 1987 blurb – as I say, forgotten by me since then – are my quoted comments on the cover:

‘What is reality and what is fantasy can never be disengaged.’ And “In my writing I take this a stage further placing my magic imagination at the service of the basic story which may be a well-rehearsed refrain.’

I had forgotten that I had made this declaration on the cover of Lizza, but now I must say that I have continued to write and work from these principles in all the decades since. Evidence for this commitment still exists in many of my posts here on Life Twice Tasted. I have also preached these principles in many of my writing workshops.   Check here

I am sure I have written or expressed those same feelings this year and in all the years since the publication of Lizza.  You will find similar principles expressed throughout my blog posts.

I am looking forward to collaborating with Donna in creating and documenting this archive. And in the process I will learn a good deal about myself and my writing life. In short it will be another story taking its place in the the web of stories which constitute this writer’s life.

For your possible interest check here for  a list of my Publications:-