Decades ago I was working as a senior lecturer, running a complex household of hard-working husband and two talented, resourceful children, keeping an eye on my clever mother, and – as well as this – working on my Master’s degree in Education.

And I was loving all of this

My research was entitled Language and Power. As well as the historical and theoretical aspects of this research I completed the practical element at a Teesside secondary school. The school had an outstanding head teacher, the late, great Malcolm Glenn, who was eventually an eminent HMI. Malcolm was a liberal-minded and forward - thinking educator and this – the location of my research - was a very happy and very successful school.

My research made use of qualitative method - interviews and conversations with eleven - to fifteen-year-old pupils - to discover how these children perceived and experienced the power structures within that school. Location was important; I interviewed and spoke with pupils only in the corridors and obscure corners of the school - specifically not in places which signified the concrete power of that institution such as classrooms, staff rooms et cetera.

The eventual merging all this loose qualitative material into a viable research document was a complex writing experience, incorporating the making of significant links in the data, formulating ideas and ultimately writing a coherent document.

In later years, as I proceeded to write and publish a string of novels, it dawned on me that this research and writing process had not been dissimilar to writing a long novel. It also dawned on me that in this academic process of writing up my research I was - without intention -honing my novel-writing skills: these two aspects of my creative experience were merging in an interesting way.

In Malcolm Glenn’s school, relationships between adults and children are open and mutually respectful, so the children and young people here accept me as I walk around in the school with my notebook and my odd questions. I think they quite like loitering in corners talking to this strange woman.

One time a tall, heavily built boy comes up to me and says “Hey Miss! You’ll want to talk to me!” His voice is surprisingly deep.

I look up at him. He is half a head taller than me.

Pen hovering over my notebook, I ask his name. This is always my first question,

In time I was pleased to deliver my research, nicely bound in black leather, which qualified me for my master’s degree. Afterwards I was flattered when my supervisor invited me to proceed to a PhD. I thought hard about it and decided not to take this path, as I was now working on my third published children’s novel, after which I was planning to embark on my first adult novel.

And now, decades later in this ongoing review of all my novels and stories that I am working on with my friend Donna M, we come to the novel called The Real Life of Studs McGuire. (Published 1987).

In working on this book as I was developing my main character – a tough resilient boy who vows to revenge his friends – I remembered the boy in Malcolm’s school called Stuart, the boy who stopped me in the corridor while I was wearing my researcher’s hat and said, “My name is Stewart but you can call me Studs.” This was when, trusting my instinct, I borrowed his name and perhaps something of his personality for my main character in this new novel - Studs McGuire.

The naming of characters is so important in fiction.  I’m now thinking about the issue of naming for my most recent collection Siblings. (Published in 2021). For this collection I pored over academic sources of Welsh and Scottish names for the seven brothers and sisters, each of whom has a story in the collection set in 1922. I wanted names that would reflect their Celtic heritage. The chosen names reflect the unique nature of each character whose story is being told.

Now, as Donna M and I handle the book called The Real Life of Studs McGuire, we note that the cover art has some resemblance to the cover art of Theft, my first published children’s novel. (See earlier post about Theft.) In each case the visual story arcs are very similar. There is such energy and implicit knowledge of children’s life there, as the action surges to the centre front of the cover. And the urgency within the narrative is reflected in the illustrators’ images for the two books. It is only all these years later that Donna M. points out to me that the artwork for both of these covers was by the artist Steve Braund.

You might be interested that I republished The Real Life of studs McGuire in 2014. This was an interesting exercise but I still prefer Steve Braund’s artwork to my own concept for the new cover which is it must be admitted modern, sharp, and dramatic. What do you think?

I have to say that I am realising now this journey with Donna M. through the sequence of my novels maps my writing life in all its aspects. It is all proving very exciting.

1987 Edition of The Real Life of Studs McGuire 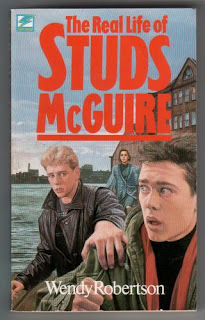 Studs McGuire is determined to find out the identity of the kids responsible for taking his friend. Tony on a drugs trip. As a result, Tony lies unconscious near to death in hospital and studs is set for revenge. And then comes Nova – and studs that never met anyone like this girl before. We’ll never cooperate with him on his quest to find the loathsome flicker with his punk followers, The quest is a dangerous one, but still feels Tony’s very life depends on the outcome. 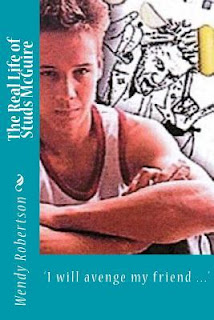 2014 Edition of the real life of Studs McGuire:

“Maybe I can do that, Studs.” Tony’s voice squeaked a bit but he coughed and said, “See you then! In a deeper tone. He turned round and banged out of the café followed by his two advisers. Almost instantly the rest of the kids in the corner stood up and trickled out. The big lad called Sligger averted his eyes as he passed Studs in the girl.