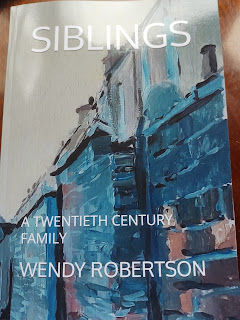 At last, after one or two to production hiccups, my new collection Siblings is now live for interested people on Amazon. Producing my own volumes is the most exciting late-life experience for me. Since Theft, my first published novel in 1972 (one keen reader remembers this novel here )  my novels have been produced by major publishers accompanied be a small army of accomplished proof-readers and marketeers.

In those days I just wrote my novels alongside the many other things – children, husband, demanding profession - in my life. These novels would be long - often running to 80 or 90,000 words.

However, in recent years the world around me has changed radically:  it has shrunk and slowed down, dominated as it is now by my role of full time carer. However, writing is my vocation, and I am still writing – now rather slimmer volumes -  and publishing them myself through  Amazon Createspace.

As my Auntie Alice (aka Eirwyn in my newest book Siblings…) wrote in my autograph book circa 1951. ‘I am the master of my fate, I am the captain of my soul.’

This is never more so than my new collection of short stories, Siblings.

These later volumes are slimmer and perhaps do not appear so genre-specific as many of the early novels on my list. When I first started on this private publishing gig (see Damselfly )  I continued to produce in the  long fiction form. – Becoming Alice – The Pathfinder – An Englishwoman France – without deliberately meeting the protocols of genre fiction. (One of these books - the novel The Bad Child features an extra perceptive middle child who resembles Ayla, the central storyteller in Siblings.) Other recent books feature short prose (Kaleidoscope) and  poetry (With Such Caution) turning more and more to the seductive melding  of memoir and fiction about which I have written here on Life Twice Tasted before. Of course there have been those larger novels one was Becoming Alice the other one The Bad Child. And I have another one in plan.

I am happy with them all. Writing and producing books in this way is not dissimilar to having children, in terms of the protective pride one feels as they venture out there in the world

I am feeling that now in the case of Siblings, out there, strutting her stuff.

So here I am - rather weirdly with my editor’s cap on - talking about myself in the third person on the back cover of Siblings:

In this collection Wendy Robertson dances the borders between memoir and fiction, exploring the lives of seven siblings presided over by their mother who was widowed in the First World War. Their separate stories begin in the year 1922 in a mining village in South Durham. Each of the five sisters and two brothers has an individual story unique to themselves. The storyteller here is observant Ayla, the middle child in this talented family.

She has published many novels and several books of short stories. Many of these reflect the history, landscape, and personalities emerging from County Durham, where she has lived most of her life. In that time she has also travelled researched, written other novels set in London. Coventry and North Wales and far afield as Singapore, America, and France. Discover more about these novels on her blog at http://lifetwicetasted.blogspot.com/

See her essay about dancing the borders between fact and fiction,