This is Queenie, whom Paulie  first meets in the white van on the way to prison…

…That time Queenie was sectioned and in the hospital they gave her the pills that took away her visions of the giant trees and stars and the Water Man.   She was meek, very good, in the hospital.   She helped with the tea rounds, taught a young girl to read, and stayed tucked up in her bed all night.

When they had a case conference the professionals decided that Queenie Pickering was a prime candidate for Care in the Community, now not only fashionable but compulsory.   Her house with its cocktail cabinet was sold.  In a rare soft moment she had signed the lot over to Janine, her niece.   Janine had sold it and gone off to build a new life for herself and her boyfriend Roger, in the depths of Canada.

But there was sheltered housing with a very kind warden.  Queenie - for everyone called her Queenie now - Queenie could live there and the nurse could call every week to see that she was taking her medication.   Everything would be Hunky Dory.   Wasn’t that how Care In The Community worked?

After a week Queenie walked out of the sheltered house.    She put on her hat - not so smart now - put all her most precious things in three carrier bags, and caught the long distance bus to the town where they would not find her.   Best to lie low, she thought.  Best to lie low.  The gleaming Water Man would be there.  He was everywhere, so he would be in the city.  And the sky in that place would be studded with the pearly moon, the golden sun and the silver stars.  And there again the trees would stride the earth. 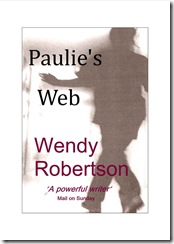 ‘…when bats fly at noon

and owls take refuge in darkness

proud to be independent

to hide their isolation…’