…Picture this Our writer goes on Monday morning to spend time with writers in Cramlington. Early start to drive there. She found the place after a few false starts. They  passed the library and the Pheonix pub, where she has given talks in previous years,  This time it was a church hall which she  found after circling quite a number of roundabout. (One lady, when she arrived ,was sympathetic. Cramlington is roundabout city, she said.)  …

We arrived just in time and a crowded room with a large circle eager faces met me . I had a little flutter with bags and books before I launched into my take on a wroiter’s life.

It was interesting to note that half of the members of this group were men.  This is unusual as many groups entirely or almost entirely consist of women. There was definitely an energetic buzz  in this room.

I referred to my writer’s memoir 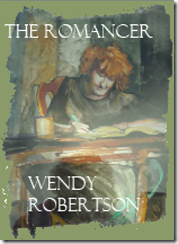 The Romancer within the talk because this is my own  literary take on my writer’s life. I focused first on what I call ‘picture this’ – a piece of writing rendering in the third person.incidents which happened to me.

I read two extracts which begin…

Picture this. A little girl of three in a Fair Isle cardigan, playing outside a house in Lancaster. With her head of Shirley Temple curls she’s winsome, prettier than she’ll ever be in the many years to come. She’s chalking on the sill of the big bay window. She stands back. That looks right. Just like she has seen her mother do, when she writes her letters. But then the little girl frowns her characteristic…

and from much later in the book

Picture this: Our writer, now our young mother, is sitting with her back to the sea wall at Alnmouth on the Northumberland coast, surrounded by the detritus of a seaside picnic. The wind from the east is cutting and she wears two ponchos knitted for her in carpet wool - bought as a bargain - by her mother Barbara.   … Our girl has never liked the cold, suffering blue hands and feet as a child….

I read these extracts to show  that writing about your experience in the third person carries  a curious fictive liberation and allows you as the writer to get closer to the truth without the internal gag of reductive autobiography.

Then it was their turn. I challenged them to write their own ‘Picture this. Some people were unsure. One man said outright that he couldn’t or wouldn’t do it. But he was persuaded. In fact these writers  met the challenge wholeheartedly and the read-around revealed some genuine  talent and sensitivity among these writers.

The Picture This notion had sold itself and the writers showed both their talented response and their satisfaction in the process.

It was a very staisfying, busy and hectic morning and Avril and I found our way out of Cramlington more easily than we found out way in…

Footnote The discussion was very lively and interested and moved to the distraction of misleading covers and democratisation of publishing for writers through Kindle. More on both those subjects next time.

Take a look at my ebook Paulie’s Web ….