Confessions of a Defacer and The Paris Review

<<See my inspiration note above on the left!

I have confession to make about this bad habit of mine.

I have friends who believe this is a terrible, destructive habit. After all, look at playwright Joe Orton who in the late 1950s (with his partner Kenneth Halliwell borrowed books from Islington Library only to returned some of them altered in bizarre ways. Before returning others these two extracted prints to decorate their small flat. Discovered, they were charged and sentenced to six month in prison, which - even from this distance - seems perversely, astonishingly harsh.

Prison changed Orton. ‘It affected my attitude towards society. Before I had been vaguely conscious of something rotten somewhere, prison crystallised this. The old whore society really lifted up her skirts and the stench was pretty foul... Being in the nick brought detachment to my writing. I wasn’t involved anymore. And suddenly it worked.’ ’[3]

Joe Orton went on to write iconoclastic black comedies which still find an appreciative audience. His own life - and death - with Kenneth Halliwell in itself was a tragi-comedy of quite Shakespearean proportions.

No, I’m not aiming for prison (been there – would never take the risk). And the books I deface are not from any library. They are my own property and it is my choice to do this terrible thing. In academic life and in my original writing life my joy has always been researching any topic or concept by reading in depth. When I was writing Long Journey Home I read what seemed like hundreds of sources about the fall of Singapore in 1942. These included the autobiography of a Japanese General who was a figurehead of this worst defeat in the history of the British army.of the British. (- I hasten to say I read it in translation – French I can do, but not Japanese...) But this book. like all my working books, is scored across and argued with by me and my

You would think that the advent of post-it notes would save me from my disgraceful habit But all they mean is that my books are densely ticker-taped with markers that then draw attention to my underlining and comments.

Paradoxically I (almost never) deface novels like this. They might get the post-it ticker-tape treatment, but I'm much less likely to scrawl all over them.

The reason why I've been thinking about all this is, shut in by the beautiful/horrible snow in the post- Christmas hiatus, I've taken to prowling around my bookshelves looking for respite, for amusement, for stimulation.

In my wanderings I came upon this lovely fat bright yellow volume – first of a series of four - of author interviews from the Paris Review * These cleverly written, long , elaborated interviews stretch from Dorothy Parker (1956) to Joan Didion (2006) , by way of Ernest Hemingway, Kurt Vonnegut, James L Cain, the fabulous Rebecca West and the erudite Elizabeth Bishop. And more.

This book still has my usual confetti of post-it notes and underlinings, margin comments and scratchings, from a year or so ago. But I plucked it off the shelf and raced through it again, reading it afresh occasionally saying Yes! and punching the air. I remembered how inspirational it was when I first read it and just what giants these people were even though at the same time they can be closely and reassuringly vain, self conscious, and human.

And now I'm inspired yet again by these varied, contradictory, insightful and self-knowing views on the writing process, handed to me as they are, across time and space by the agency this fat yellow book, complete with all my underlinings and its scratchings.

For some reason this time I was most transfixed 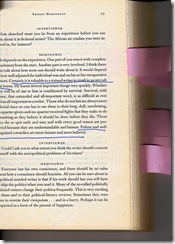 by the long interview with the legendary editor Robert Gottlieb: how I relish again his distinctively authoritative take on the editor’s task : an interesting view from the other side of the fence.

Believe me it was a delicious escape for this writer on an imprisoning, snowy afternoon - into that much defaced, Fat Yellow Book.

* The Paris Review says on its excellent website that since 1952 it has been at the vanguard of great literature, bringing superlative work by acclaimed and emerging writers to an international audience.