The Miracle of The Woman Who Drew Buildings

It’s like a small miracle when a plain brown package arrives with the first edition copies of your new novel.

You tip them out. You put them in a row. You stand them up, you lay them down. You smell them. You flick the pages, to 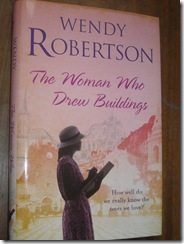 hear that crisp fresh sound. You open the book and on those pages - set for ever – you read the characters, the conversations, the comedies and tragedies  that have somehow spun themselves out of your writer’s head. The words and paragraphs look strange, as though someone else has written them.

You have lived with those words and phrases for one or two years. You have lived with the idea  of  the novel for five or six years (more of this in the next post).  And now, here it is. It looks good, it feels good, it reads well. It has legs and will dance out into the world. A shiver goes down your spine.

What is The Woman Who Drew Buildings about? Well, when you get the novel, the blurb will give you a clue to the story  but I will tell you what it’s about! It’s about a mother and her grown up son – Marie and Adam Matheve - who are estranged; about the romance of buildings; about the world here and now, and the world in the 1980s when Poland was under the unravelling Soviet domination; it’s about out-of-body experiences; it’s about the rejuvenating circles of redemption that can come out of crisis. And it’s about the long-kept secrets and the different kinds of love that glue our lives together.

Angus, who loves chocolate, is around while the books are being unpacked. He says my anxiety and excitement about the book is just like he feels about his GCSE results, due out this

Thursday. Meanwhile, he’s dressing up, trying on some new clothes. But then he goes to find his grandfather’s big business coat  (bought in those same  1980s when my character Marie Matheve was in Poland)

‘What do you think, Wendy?’

He also insisted on to taking these other  funky photos here. He thinks they are very cool.

The dolly in the first picture? Oh, I made her for Debora when she was small but she never moved house when Debora did. She sits on a shelf  and watches me work and is very wise. According to her, The Woman Who Drew Buildings is my very best novel ever and everyone will love it….

Next post is about the wonderful Mary Davies, writer, artist and healer, who was the inspiration for The Woman Who Drew buildings.

If you fancy it, The Woman Who Drew Buildings

is published by Headline Book Publishing

and is available in all good bookshops.

Email ThisBlogThis!Share to TwitterShare to FacebookShare to Pinterest
Labels: Mothers and Sons, Out of Body Experiences, Poland