David Almond and a Life in Short Stories

My highly literate reading friend Hugh brought in a copy of David Almond’s fascinating collection
Half a Creature from the Sea; a life in Short Stories. 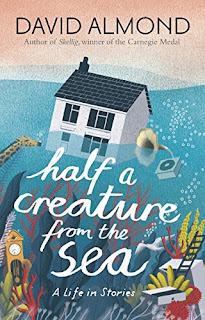 This will be discussed at the next meeting of Hugh’s Reading group in Spennymoor. I was instantly interested as David is an old friend and colleague of mine. (I remember seeing the first manuscript of his fabulous prizewinning novel Skellig.)’ In my opinions David is the most significant writer of his generation. Digging into the real, the surreal  and imaginative truths of children’s lives in the Twentieth Century.

His writing workshops, like his stories, are simple and complex, ambitious and accessible.

I asked my friend  Hugh what he thought  of Half a Creature from the Sea; a life in Short Stories. He loved it. 'These stories are enchanting, highly  imagined; an  extraordinary  mixture of realism and magic. And  there is an invaluable accompanying narrative linking them to his life: how stories are an interesting blend of preparation and inspiration.'

Extract from David Almond’s book of short stories       Half a Creature from the Sea.harry miller’s run

I have quoted it here in full because it is an experience we shared when I was writer in Residence at Low Newton Women's Prison and I appreciate the truth of what he says here and his mentioning Avril and me. We had many visiting writers during my time there and he was the best.

Page 106 “… to prepare to write the story I went to watch the run. That morning I’d arranged to give a writing workshop at low Newton women’s prison in Durham along with the writers Wendy Robertson and Avril Troy who ran the (creative writing) program there.
When I arrived I was guided through a series of gates and doors by uniformed prison officer. Each one was unlocked, opened, then shut and locked again. Keys jangling steel clanged.
I was taken to a library and with a few arm chairs and tables and it. Then the women came in. They were shy at first, may be suspicious, but they soon relaxed. I talked about my life and my writing.
We did a couple of quick imagination exercises, made a a few first scribbles. Some of the women began to tell me about their own lives in childhood. They hinted at the difficulties deprivation and abuses they’d endured they talked about the constriction of being in this place, about the fellowship they try to develop with each other, and the inevitable frictions and fights. Many of them wanted to write about themselves, set to to somehow turn their lives into coherent stories.
I said that fictionalising in your life can make it seem more real and can make difficult personal experiences more bearable. We scribbled again, and began to shake the scribbles into narratives. Before I left one of the women suddenly said,  ‘ I’m like you David. My childhood was like yours.’
She laughed.
’And look where I’ve ended up!’ she said.
I was led back through the clanging doors. At the exit Avril told me that there was much more the women could have said.
‘ They’ve had some awful journeys,’ she said. “
……………………………………………………………………….

Afternote: My book  Paulie' Web  is the  creative outcome of mytime in Low Newton  over three years, as Writer in Residence

Email ThisBlogThis!Share to TwitterShare to FacebookShare to Pinterest
Labels: Creative Writing, David Almond, half a creature from the sea., Women in Prison