A Writer’s Commentary* on 'The Invention of Angel Carter' by Edmund Gordon,

I've just finished reading my Christmas present from @lickedspoon : the new biography of Angela Carter by Edmund Gordon. It was a thoughtful present. She knows  I am very interested in the esoteric elements of the writing process as well as the unique cultural and political processes of the twentieth century,

So, I passed several days avoiding the inevitable post-Christmas torpor in reading this biography of a writer who perhaps saw herself - and was seen - as the Che Guevara of English Post WW2 letters. 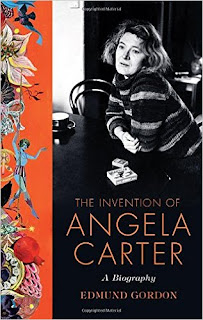 I don't envy this biographer his huge task of apprising the millions of words, in terms of work, journalism, commentary, and letters in her archive, including a thousand pages in letters to a single friend - all now deposited in the British Library, if you want to dip into it -   that flowed from her pen in the complex task of self-creation - of  defining and redefining herself, inventing herself, endowing reason to her impulses, adapting her interpretation of her thoughts and experiences  to 'prove' the truth of the centrality of myth in her world-view.

But the more I read Gordon’s book the more interested I became in the way the unique psycho-drama of her own life and the weird psychopathology exploded into her writing. Having just finished a novel myself, focused on the inner life of an imaginative girl child I was a particularly captivated.

I began to see how 'the clever-undergraduate' characterises Angela's writing. Because (although she had a truly big brain tuned into fantasy and turned that to good effect) she didn't get to at eighteen. Her intense reading was a rag-bag - widely eclectic and impulse-driven, and - although she later did a degree as a mature student - without the essential filter of intellectual discipline or  academic discourse to sort it all out so she could internalise it and allow it to bed down in her consciousness. Only in this way do we begin to integrate our acquired knowledge into our unique conssiousness  – to make it our own. She was confident enough then to rubbish certain lecturers and experts and adore others. So she missed out on the true academic discourse that prevents youne junior school argument
Jane ‘tis so!
John ‘tis not!
Jane ‘tis so!
John ‘tis not!
Jane ‘tis so!
Jane bashes John over the head,

As the details emerged in this biography it seemed to me that Angela was like a magpie picking up bright things (and people) with which to line her writer's nest. The result of this unique evolution has been - despite the hagiographic splurge of comment that emerged after her very sadly early death at 51, the range of her literary output can still be seen is somewhat chaotic, derivative and distinctively un-synthesised.

These are the characteristics of an autodidact, of course. Being a bit of an autodidact myself I am aware that we grasp on every new bit of knowledge or insight like a sweetie and parade it around like a banner. Angela Carter did this with her mixture of Freud, Jung, Bruno Bettelheim, de Balzac, Baudelaire, Burgess, de Sade, Grimm, Perrault and many others (A formidable task for this biographer to explore ...)  Sweeties from all these sources were selected to fit her particular imagined world-viewn regarding what it was to be human or animal, what it was to be a man and what it was to be a woman. And she communicated her special view  that the differences between all these -  (animal, human, man, woman) were essentially a social construct rather that a given identity -  through her literary and journalistic output.

I began to think that there is something of the infant in Angela’s phenomenal self-absorption.  I was also very impressed by her literary self-confidence. She always felt she was a great writer and fated to be famous, and convinced the people around her of this, through her forceful self belief, her overt un-synthesised scholarship, alongside her mannered whimsical charismatic charm. These qualities in total made her  free spirit attractive to a wide range of people who were much less sure of themselves in those changing times. These included Carmen Calill and Liz Calder, themselves gifted literary change makers; they included her baffled depressed first husband and her silent, enamoured young second husband. They included her two Japanese houseboy/lovers – one who thrived in later life, on who didn’t. They included some of the students she mentored at the Universities of Sheffield and . (The advice she gave, documented here, seems strange to me.)

I began to think that her greatest creative product was herself; self-made, self-storying, self-constructed. Her complex  construction included the paradoxes confident/awkward, boastful/overtly modesty.

I ended up wondering whether Angela had ever recovered from being the intensely spoilt, greedy child of indulgent parents especially including an obsessively possessive mother. The latent cruelty which blossomed in Carter's emotional make- up and in her encyclopaedic writing was brought to flower in part through her lifelong demonising of her mother, in her struggle to declare her own separate soul. The stifling, intense feminisation of her childhood experience, it seems to me, set in motion her further dogmatic (ie intellectually unsynthesised) assertions that the differences between men and women are a social construct. And that there need be no rules, no boundaries to her writing.

Still, when she feels strongly about something one can trace an inverted snobbery in her commentary. She flags up her distant working class background when it suits her, to despise the pretentious middle class around her, of which she is a member. And then her reflections on the working class people around her focus more on the ridiculous and comedic than the human,

It seems she is such a dedicated individualist she lacks empathy with both the middle class and the working class contexts in which she finds herself. This might have afforded her much greater insight as a writer into the true nature of myth and fairy tale in society. This might have happened had she not hi-jacked them to fit her own psycho-social worldview and make her personal art form.

The inchoate tumble of these ideas - much vaunted as 'groundbreaking' and 'original', by her reader and writer-fans - lacks the discipline which would have allowed her to work out a credible coherent argument and contribute widely to thinking and storying in this field. Her self-described role as the 'moral pornographer' is disingenuous. It has a   lot of esoteric charm but it lacking in rigorous thought.

Reading Gordon’s engrossing account of the talented Angela Carter’s invention of her own life did not at all put me off recognising her as a good writer in her time.  But  I kept thinking of the bright universal wisdom of Ursula le Guin which for me places her way above Angela Carter in terms of the skill, the fantastic insight which endows true literary value of her work in the similar field.

The Invention of Angela CarterA Biography

NB* This is my own commentary* - a writer’s reaction this book.
For a more straightforward review read
Rosemary Hill’s review in the Guardian