Does The Use Of Colons And Semi-Colons Date Your Style?

In 2013 I wrote a post asking the question Does The Use Of Colons And Semi-Colons Date Your Style?

It still seems to me a relevant question IT occurred to me again as I
am editing my new novel (very exciting!) and have also been reviewing other people’s work and giving editorial judgements. 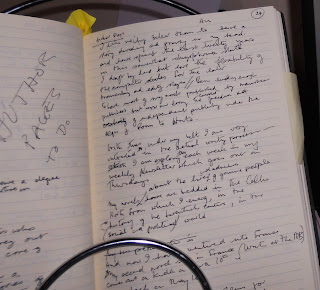 We all have attitudes to prose – our own and that of other writers. As for me, I love the subtle energy that colons and semicolons add to prose. They are syntactical tools that act to smooth the progress from sentence to sentence. They energise the forward movement of the narrative.

Some people do seem to have problems with the use of colons and semi-colons. But really it’s not so difficult: we can use the colon to provide a pause before introducing related information, while we may use the semicolon to create a break in a sentence that is stronger than a comma but not as final as a full stop.

But there are times when we as writers need to stand back a little.

Recently I asked a friend – a good editor – to cast a final eye over a story I'd been polishing making it ready for a prestigious competition.

My friend said many very good things about the story, then hesitated.
‘What is it?’ I say, with writerly anxiety.
‘Well. The colons and the semi-colons…’
‘What about them?’ I am defensive. I love these subtle tools of syntax.
‘Well, somehow, I’m stubbing my toe on them.’
My eyes narrow. ‘They’re all correct.’ I say.
‘Well somehow they look…’ she hesitates. ‘It’s different with essays and factual. In fiction they look…’
Then it dawns on me. ‘…dated, old fashioned?’
She colours, ‘Well, not quite…’

But that’s certainly what she means.

I really, really hate to think that my style might be dated. I like to think I have an open mind: a fresh view of the world in my work. Each novel, each story is a fresh adventure for present day audiences to read. I like to think my writing reflects this for my readers. I hope it does.

I went through my story again, reviewed the colons and semi-colons and removed two of them. I’m not sure whether or not it was an improvement. I have no answer as yet to this dilemma. We’ll see

Do you bother about colons and semi-colons?

‘The past has never felt so real as in the last days of Roman Britain and the uneasy peace between natives and conquerors portrayed in Wendy Robertson's 'Pathfinder'. Heroine Elen is a beautifully drawn character uniting natives with the conquerors.
Pathways lead in two directions and fey Elen's 'honeycomb' mind leads back centuries into the mists of time. But she is young and resourceful and her ordained path leads from her beloved coastal marshland of West Briaininto Roman Gaul when the Roman leader of Britain Magnus Maximum falls I love with the native girl, drawing her father and warrior brothers into his military schemes.      The novel is filled with believable,fascinating characters including Aunt Olwen a drowned spirit, song-writer brother Lleu and Quin the faithful Roman devoted to both Elen and Magnus Maximum.       It is a delightful, thought provoking read and I could not put it down. So many questions answered so many tantalisingly left. Elen has a future in her homeland and I want to know more.’