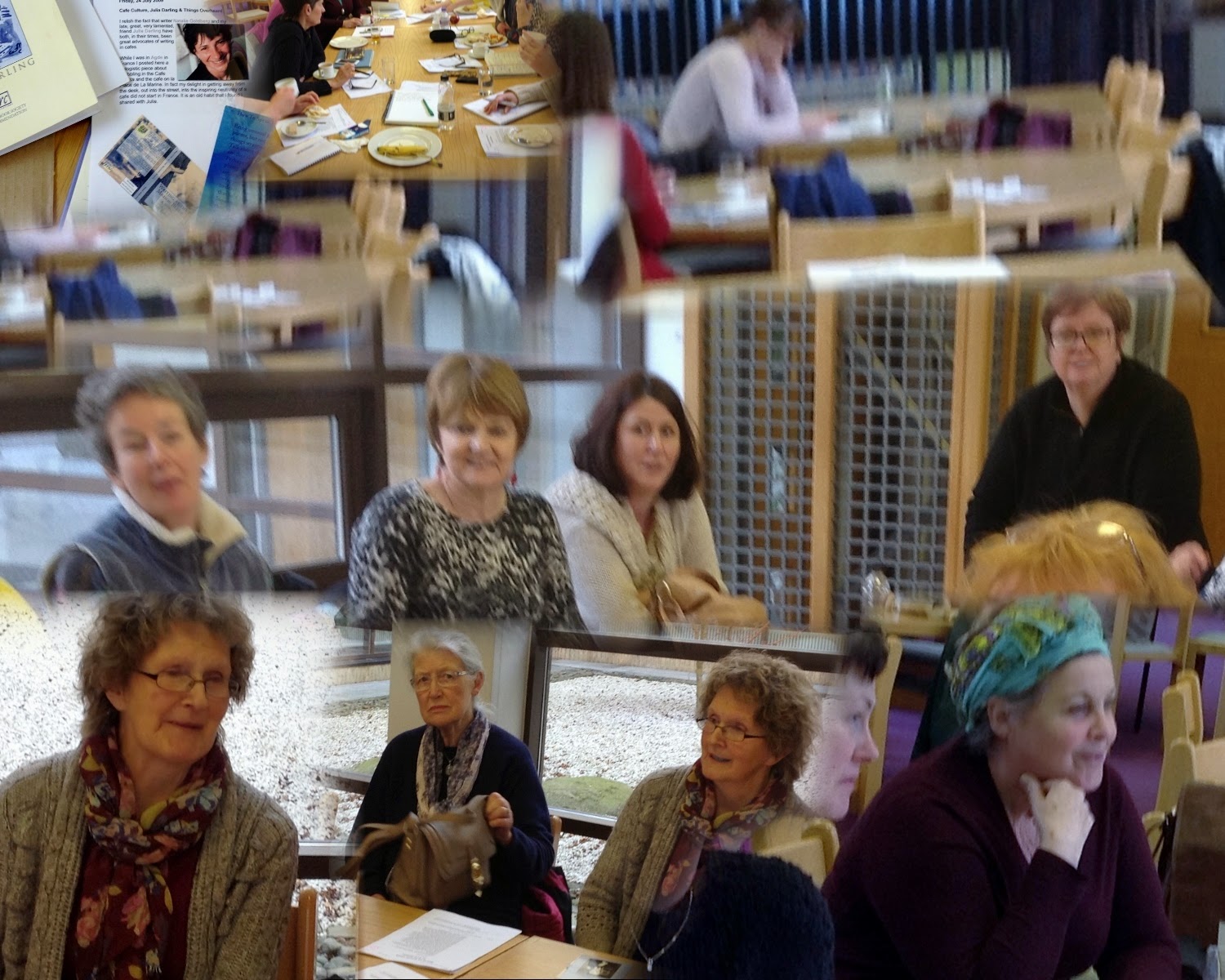 This workshop was offered by our friend playwright Anne Ousby, to honour the
memory of the multi-talented Julia Darling. We began by talking a little about our various memories of meeting Julia – of learning from and  being inspired by  this charismatic writer.

As for me, I first met her when I presented her with the money prize for a competition which I had judged, I did not know or know of her then her at all then, Today I quoted  from a blog post I wrote in 2009 in which I recalled our association through the years. This post is printed in full after below here..

This  great group of interested and variously experienced writers, encouraged by Anne, we  set about writing our fragmentary plays. Based on the idea of the Rendezvous Café – a favourite place of Julia’s in Whitley Bay.

For my contribution I adapted a scene from Writing at the Maison Bleue *
into a playlet. (I did this in tribute  to Julia who always took the risk of participating in her own workshops. (You will note this from the original blogposr which I have printed in full at the end of this one.)
*HERE as en eBook ** HERE as a book

Joe, 19, just out of care meets his friend streetwise friend Lolla in a café, He comes in holding a big envelope

Lolla What’s this?
Joe  I jusr won this prize, like. Worth a grand.
Lolla: A thousand quid! Y—yum. Something to celebrate with, Joe..

(Joe knows that Lolla’s idea od celebrating os something up her nose, or down her throat.)

Joe. Nah you can’t do that.
Lolla. What can you do then?
Joe: You’ve gotta go to this place.
Lolla. What place?
Joe. This hot place by a canal.
Lolla  My Grandma lived by the Grand Union Canal over in Manchester, There, is it?
Joe: Nah this is in a hot place, There’s a picture of it. By a canal.  In  France.
Lolla. In France? Bloody Mike! You need a passport for France.
Joe. I gotta passport.
Lolla. Passport? You? You got no passport, Joe.
Joe Yes I do. They got is them once for this trip to Paris..Some charity gig. Help the poor.
Lolla: So this prize is to go to Paris?
Joe., Nah. Like I say it’s by this canal. Much further. Down by the Mediterratian Sea, it says..
Lolla: So you gotta go there?  To get this prize?
Joe: Aye. I gotta go there. This is the prize.’
Lolla; Not fair that, Joey, You should be seeing some cash. That’s what prizes are. for  Cash ….

Outcomes
Based in the idea of the Rendezvous Cafe the dramas and plays that emerged from Ann's workshop were various in style and eclectic in subject matter. They all buzzed with life – and that difficult thing – laughter. They all had virtue.

I relish the fact that writer Natalie Goldberg and my late, great, very lamented, friend Julia Darling have both, in their times, been great advocates of writing in cafes.

While I was in Agde in France I posted here a eulogistic piece about scribbling in the Cafe Plazza and the cafe on la Place de La Marine. In fact my delight in getting away from the desk, out into the street, into the inspiring neutrality of a cafe did not start in France. It is an old habit that I found I shared with Julia.
Julia was not just a great tutor, poet and playwright, she was a novelist and lyrical poet who wrung every last drop of joy and delight, love and affection, out of her writer’s life, before her tragically early death.

For several years she came here to give wildly popular workshops on her own and sometimes alongside me. Despite her great gifts she was modest and comradely - as well as merry, enabling and respectful of others’ talent. She always worked alongside the work-shoppers, never sat on a pedestal above them. She risked herself alongside them in the read-around, saying, ‘Well this is mad, but…’

Julia was the mistress of original, telling, firecracker metaphors and knew the magic of the right word in the right place. The work-shoppers would go off inspired to write closer, to do better.

When lunchtime came around she’d rush off, either to swim, or go to the nuts and bolts cafe near the old Post Office. She did this for rest, for refreshment, and inevitably, for inspiration from the other tables, where bin men and office workers would stoke themselves up with cake or a good fry-up for the afternoon’s work. Things overheard there would be filed away in that considerable intelligence and become natural resource for her in her writing. She had a sympathetic and an empathetic ear for the natural dialogue of so called ordinary people.

This is interesting, as although she was a bit of a maverick, she came from a distinctive upper class intellectual background. But she was uniquely classless in her apprehension of the life and people around her - so very refreshing in writing circles that can be riddled with all kinds of snobbery.
Much has been made of the graceful and poetic way in which she tackled the process of dying - writing of its challenges with frighteningly forensic insight and luminous grace. To be honest, though I prefer to think of her in terms of the way she lived. She was a joy to be with, wryly witty and always kind. She was inspirational and prepared to be inspired. She lit up any room she was in with her broad smile and wide eyes.

In my own cafe sojourns eavesdropping is of secondary importance to a clear table not far from the window and staff who will both take care of me and ignore me. Mostly I sit here and fill my diary with plans; make both creative and practical lists; draft these posts for my blog; scribble the next chapter for At The Villa d’Estella; read a heavy tome about ‘Gaul in Antiquity’ for said novel. And so on.

These times away from the desk are essential for someone who works from home. Surrounded by strangers, I work very quickly, get a great deal done. (I’ve been thinking that this perpetual desire to get away has something to do with my Pisces star sign, which I wrote about recently…)

But yesterday as I was walking to the cafe I passed two men talking. One man was saying to the other. ‘…and as well as that I’ve got this cancer ripping away at my insides…’ This so perfectly expressed a combination of anger and stoicism that it made me want to cry.

And it made me think again about the exceptional and radiant Julia Darling
.
WX
(AFTERNOTE I see now that Julia’s star sign was Leo - Generous and warm-hearted - Creative and enthusiastic - Broad-minded and expansive - Faithful and loving. But her sign tipped into Virgo - Modest and shy - Meticulous and reliable - Practical and diligent -Intelligent and analytical. I am thinking about all this because my mind if full of Stella, the astrologer in my new novel. But thinking now about Julia, all this fits…)