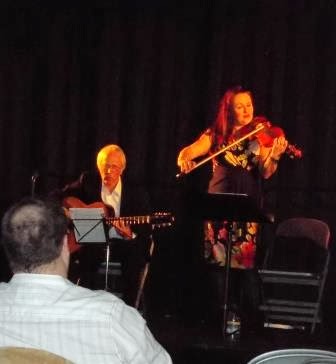 Spent a  great night in good company, in Bishop Auckland Town Hall Theatre where the string jazz group  Djangologie treated us to great string band jazz  inspired by Django Reinhardt and Stephane Grapelli  who co-founded the Quintette du Hot Club de France, (described by critic Thom Jurek as "one of the most original bands in the history of recorded jazz.'.)

This  group continue in the inspired tradition of Hot Club de france -each member a viruoso on his or her own instrumants - Emma Flisk handling her violin with a high skill, wit and intuition which Django himself would have relished. Gile Strong and James Birkett in very individual styles reflecting the gypsy tradiditons of Stefane Grapelli with a complex modern.

Group leader Mick Shoulder underpinned it all with the jazzy authority of the double bass. He also composed some of the pieces which the group performed, in addition to their own take on the Hot Club repertoire.

One of my favourite pieces was Artillerie Lourdes (Heavy Artillery) composed and performed by Django towards the end ot World War Two, reflecting the Allied Bombardment with preceded the Liberation of Paris., There are references here to the 1812 overtures too, In a gypsy fashion.... 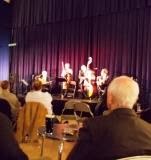 If Djangologies comes to a venue near you, go and see them and be refreshed,

As I say, it was a great night in good copany

I have the CD now, It will be a great track to write to,,,