Postcard from France: Living Inside Your Own Stories

It can be a problem, as a writer, to know where work starts and play ends, or work ends and

play begins. This is never more so than on holiday when I feel I am living inside my own stories.

So, here I sit, in this café at the end of and ancient quayside – in use since this town was a Phoenician trader’s port in 600BC. Like the 17th century Maison D’Estella where we stay the quayside plays in a recent novel :

… Now we’re on the quayside and I stumble on the uneven lava blocks that pave it and – quite naturally – he takes my arm. I can hear the jingling of boat tackle and the shout of seamen’s voices but these there are no boats drawn up on the quay just waiters and waitresses setting out cutlery and napkins in the smart pontoon cafés huddling here in the place where ships once docked, drawn up side by side, ready to unload. Madame Patrice said that, didn’t she?
‘You know Madame Patrice? You said you knew her,’ I say.
‘I think I probably do. I knew her husband Ettiene from another time. He was a great scholar. And I am acquainted with Madame Patrice. But I’ve not been here so long, this time...’ From my novel An Englishwoman in France.

And this week I walked around the corner fromthe Maison d’Estella  to a tall thinhouse on the Place de la Glacière – visiting the apartment of my writing friend Avril. This is in another ancient building which has cut into its roof the highest terrace in the town. Here from the same novel the time slips back to 300 AD and nine year old Tib is looking down over the town from the ramparts of the house of his father, the Roman governor of this part of .

;…Tib: Good Fortune, 301 AD
A warm, salty breeze lifted the bright reddish hair of the boy, sometimes called Tib, who was sitting with his legs dangling from the flat roof of the house of his father, Helée, governor of this city which was now laid out below the boy like a map.
In front of him the neat road – square blocks of basalt – led straight down to the busy river harbour, widening halfway where it joined with both the straight road down from the barracks to his left and the narrower road to his right  that led down from the  graceful Temple of Venus. The clusters of houses on either side of the road were laid out in a grid, their black stone walls relieved by clumps of wild fig and bulging garden plots.
Tib raised his eyes and watched closely as the elegant ships hauled down their sails and resorted to the power of muscle and oar to manoeuvre their vessels into the teaming river port finally to squeeze into spaces alongside vessels already drawn up at the long harbour wall.
But however fast or elegant the ships were in reaching and tying up at Good Fortune, they had to wait their turn to be unloaded by the labourers and slaves working for the long-haired man – looking more like a pirate than a harbourmaster – who goaded them on with a combination of roars and threats which they answered in good measure. Even up here on the hill Tib could hear the deep, gravelly sound of their throaty curses.
Tib felt proud of the order and efficiency of hundreds of years of harbour routine that drove the port to such success. His father’s tax scrolls were witness to that. Now he watched the shouting workers on one part of the dock heaving ashore great jars containing fine goods – silverware, spices, pottery and wine imported into Gaul from lands across the Great Inner Sea. Then he leaned sideways to see slaves manhandling racks of  the equally tall earthenware jars now containing wine and grain, salt and oil , ready to take them in the other direction,  to the Imperial City of Rome…’ Also from my novel An Englishwoman in France

These days, of course the pink tiled roofs of 2000 years of town development obscure the grid and prevent a direct view of the quayside. But, further to the right within  the sweep of the River Hérault - whose wide estuary attracted the Phoenician traders to build the port – is the exquisite Art Deco façade of the early 20th century Maison Laurens.
Now then, this location on the river plays a part in my new - not yet published -  novel to be called The Search for Marie France. In the novel I have a fictional building used as the headquarters of  the occupying Germans. In the real history of this town the Chateau Laurens actually did fit this ambiguous role.
‘… Alone at last, Marie France could glance around herself with open curiosity at this familiar yet not familiar place.  She thought of the day she saw the cloister opposite - now just a pathway to the orchard -  used for target practice.  She wrote in her notebook:   “Three soldiers, two with their jackets loosened and one in his shirtsleeves (as white as Auguste’s mother could wash them) cleared the cloister and   brought out a sweating, terrified man – a Gitan by his looks - and tied him to the medieval stone column which must in its time have absorbed the sound of a thousand plainsongs. The soldiers took black pistols from their leather belts, exchanging grins. Other soldiers strolled across from their trucks and motorbikes to view the fun. Auguste, fear in his own eyes, backed away into a corner of the opposite cloister.
Then the three soldiers began to play this strange game - a not-to- kill game - where the soldiers fired at the man with orders not to kill him. He jumped and jerked as the pistol shots splintered the old stone around him. The soldiers jeered as the poor man wet himself and held their noses and shouted ‘schmutzigen Zigeuner‘ when he shit himself. It was a relief when he was dragged off, eyes rolling but physically unharmed, out to a truck then onto the camp down the coast where we know now that gypsies, politicos and people like my own mother and father were interned  before being transported East. The cloister smelled differently then. The scent of blood and excrement was in the air.”  Marie France put down her pen and absently rubbed the swollen joints on her writing hand…’
From The Search for Marie France. 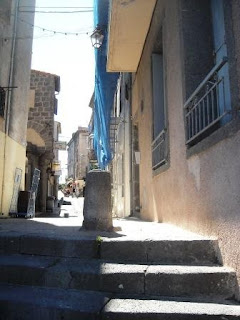 I’m now - fuelled by great company and wonderful imaginative food from Licked Spoon - working here on a new novel  at the Maison D’Estella.
More about that – actual work in progress! - before the end of this week.

Certainly, alongside bookish company, drinks on Avril’s high terrace have been an extra inspirational treat this time.

Wish you were here