Sweltering under the Paralympic Sun

I am now sitting in a leafy city garden eating gourmet avocado salad and drinking white wine. Overhead yet another jet flies by. Debora, the maker of said gourmet salad, tells me that for this month there have been more  jets directly overhead because the nearby Olympic stadium is a no-fly zone.

Despite the jets it feels green and peaceful here, like many surprising pockets of central London which confound the stranger’s expectations of a dark and dingy city. The new people just moved into the flat next door are working on their garden and Debora tells me of a man in a house nearby who has two beehives on his house. 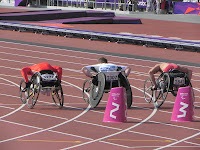 We are somewhat exhausted today because we spent yesterday being roasted under hot sun watching wonderful athletic feats by remarkable paraympian athletes in the packed Olympic Stadium. This was smaller, more intimate than I'd expected. From where we sat we had a good view of the track events and a fair view of the long jump and the shot-put. Well edited television coverage obviously expands the whole shebang and makes it seem larger than life to the people at home in front of their television. 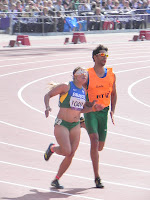 But I now know to be there was to apprehend a culture that was indeed larger than life, to witness the greater reality of the occasion. And this was not just about seeing the stoical, gifted and focused athletes competing before us, making us all more determined to try harder in our narrower lives. It was also about the crowd – lots of local voices and images reflecting our modern culturally diverse capital city alongside other faces and voices from the world. And so many families with children on the last day before schools round here began: children running up and down the aisles having fun, or being photographed against the arena, the Olympic flame in the background - historic images for the family albums. 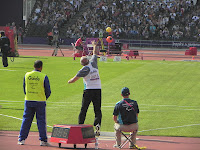 The medal presentations seemed to come thick and fast, the massed audience applauding and standing up for winners from every country. One older man nearby stood each time to military attention, his thumbs to his trouser seams. I couldn’t stand up as my ankle was playing up a bit. But I was standing up with them all  in my heart.

And it was especially sweet at the end of the session to applaud David Weir when he was presented with his gold medal. If the beautiful stadium had had a roof it would have lifted as the whole crowd joined the athletes singing our own national anthem.