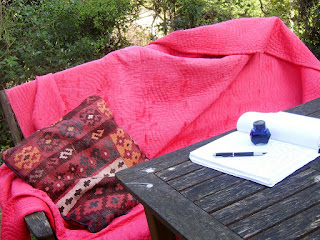 W.I.P New Novel is about a group of writers. One of them is Joe Conroy aged nineteen who lives in a hostel. He has been advised to make lists before he starts his story about Trace who lives in a group home

- Fat Bob and skinny Joan, on duty
- Bob drives the brand new minibus.
-The sea boiling up like scummy soup
- The darker sky simmering like grey custard
- The mini-bus stinking of dinner, salt, vinegar crisps and hair-gel
- Bob and Joan light off to King William pub
- As they walk away Bob touches Joan’s arse
- Glass box with weird talking clown – one lass runs off screaming
- Five pound-coins in Trace’s paw
- Bag of chips, ice lolly and three goes on the waltzer
- Whirling round and round and round
- Sea, lighthouse funfair.
- Sea, lighthouse, funfair
- Sea, lighthouse, funfair
- Woozy, sea-sick, Trace falls into the arms of a lad with red socks
- She joins him racing the tide and the tide wins
- Sheltering from the rain, tucked under the cliff
- Fucking in rain that fingers his bare arse
- The boy in red socks can’t manage
- Rain stops. Trace laughs. The lad
- punches her in the stomach and runs
- Trace is sick into a rock-pool
- the size of giant’s foot
- hermit crabs scuttling for dinner
– later the minibus stinks of
- the salt-sea, candy floss, and the last of Trace’s dinner.
Posted by Wendy R at 10:56