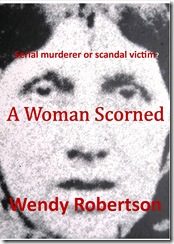 Inspired by Al from Australia who reads this page  I went back to the drawing board to redesign the cover of A Woman Scorned  the novel I am now revising to be published on Kindle.

Al thought the image too stark and severe and I now agree with him. The whole point of the novel is that Mary Ann was not the monster that legend presents to us. The evidence says otherwise. So I got out my camera and focused on her amazing, sad bewildered eyes and her sensual mouth and her perfect bone structure.

So here  is an image of Mary Ann Cotton – and the book – that is  much truer to the character in my novel and closer to the historic truth.

Extract from the chapter

(Victoria, visiting from London, is narrating…)

… The porter had taken my hand luggage and settled me in the solitary First Class carriage. I was sitting there in secluded splendour when the door was wrenched open and a pale-faced woman peered in. She pushed a heavy bag and a basket onto the floor of the compartment and lifted a fragile boy of eight or so into the carriage. Then she leapt lightly up the steps herself and settled into the corner opposite to me. I choked for a second on the scent of fruitcake and almonds, with some kind of back-smoke of lavender and honeysuckle. She filled the whole carriage with her perfume and earthy warmth.

I turned to stare out of the window, but not before I’d taken in the image of a woman of thirty or so, of taller than average height with thick glossy black hair under a rather becoming bonnet. She wore a surprisingly fine paisley shawl and - finely polished although stitched and mended – small button boots. Instinctively I pulled my own boot, with its built- up instep, further under the hem of my skirt.

Staring at the puffs of steam dissolving into trails of vapour that streamed past the window I wonder at the audacity of this unlikely woman in entering a first class carriage. Then her voice, low and surprisingly well modulated, cuts through the air between us. ‘And how have you been these past days, honey?’

In the silence that follows I realise that the woman is talking to me. I turn my gaze to meet the darkest blue eyes, large and shining in a perfect oval of a face. Now I see that she is actually quite beautiful, despite the workaday clothes. I want to smile and my cheeks feel hot.