The Semi-Colon, Knives and Collectable Books 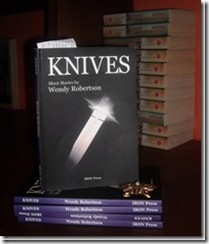 collection Knives* ‘… and I wanted to ask you, Wendy , about a novel by R C Hutchinson that’s mentioned in one of the short stories.’

This short story, Married Life? is a forensic, possibly comic, examination of the long marriage between Imogen and her husband Freddie. Submissive wife Imogen has finally broken out, visited India and made new friends.

…Imogen's new friends considered her very special and treated her tenderly. After six weeks she came back with a notebook full of contact addresses all over the world and some wonderful photographs. Freddie barely glanced at them. He was not interested in these wonders. After all he had not been there. And anyway he’d just acquired a first edition R C Hutchinson in an Edinburgh Oxfam shop. He gloated about it to Imogen. Now that he had every edition of every one of Hutchinson's masterpieces, he could relax…

On the phone Jeremy said he himself had a book by R C Hutchinson and didn’t realise they were collectable.

In fact, many years ago, I actually did know a man who collected RC Hutchinson and had all his first editions. This man even gave me his spares and I now have many – not all – R C Hutchinsons and a few first editions.

Who is this writer? you say. In his time Ray Coryton Hutchinson (1907-1975), was a best selling novelist in the class of post-Edwardian novelists such as H E Bates. He became a fellow of the Royal Society Of Literature, won the WHSmith Literary award in 1966, and was on the Booker shortlist for his posthumously published novel A Child Possessed.

Only connect! Just yesterday I saw that Faber’s inspired new print-on-demand initiative, Faber Finds, is including on their list R C Hutchinson’s Testament, first published in 1939. Set in Russia, the story is structured around the evolving relationship of two very different men - on street corners, on the battlefield, in Russian salons and in prison camps. According to the Faber pitch ‘it is a novel steeped with political ideals, with philosophical truths, and with personal heroism.’ According to me, it’s a well researched, rollicking read with great characters, from a great craftsman. It also looks good in this restrained, handsome edition.

So, in the afternoon I was lurking by my bookshelves and my hand fell on Hutchinson’s novel Elephant and Castle, (A novel set in London; I love London-set novels.) The acknowledgement list alone is a quirky rendering of R C Hutchinson’s London in 1948, the time of writing of this novel.

The opening lines of chapter one of Elephant and Castle - which would never survive the counter-pedantic eagle eye of front line editors in today’s publishing - is a miracle of grammar and syntax which could be an exemplar for any aspiring writer who is confused about semi-colons or punctuation in general. (Many are…)

A beginning writer, journalist, or reviewer could also learn much from the substance of the paragraph.

‘…In the strictest sense, it is impossible to give facts uncoloured by opinion. When a man says ‘We had dirty weather’ you know that he disliked it; another would have said ‘It was fresh and exhilarating, though there was a good deal of rain.’ No one can relate all the circumstances, and those which a man selects, deliberately or not, will owe their inclusion at least a little to his prejudices, as well as his habits in observation and memory. But remember too, that your own prejudices operate all the time. Whatever comes to your mind comes through your own screen of intricate associations: the memory of something said in a schoolmaster’s sarcastic voice; the loneliness of a foreign city; a soldier’s kindness in a railway carriage when the first light was revealing frosted fields; defections and disillusionments. The phrase ‘What I should have done …’ marks, as a rule, a misunderstanding of the nature of things. The largest mistake about truth is to imagine it is simple…’ From The Elephant & Castle by RC Hutchinson

Afternote: Jeremy is not alone. Knives is enjoying positive reactions from all over the place. And my friend Charlie says it’s in big demand in prison.

* My mother Barbara used to say that self praise was no recommendation, but here’s what publisher Peter Mortimer wrote to accompany the review copies of KNIVES:

‘Some of the short stories were published in magazines, newspapers and anthologies; one has, surreally, been transformed into a Manga comic. They are collected in book form for the first time and bring together a dozen tales inspired, as the author herself puts it ‘by the consummate experts on the darker side of experience.’
Novelist Wendy Robertson spent three years working with female prisoners, and though these resulting stories may be dark on one level, on other levels they reflect the author’s take on the recoverability of the human spirit, plus the qualities of stoicism, wit and irony. From plunging cat burglars, hallucinating old
ladies, gender bender confessions, and women seeking fleshpot escapes, these short stories expand Robertson’s already considerable reputation. First book of short stories from one of
the country’s best selling novelists.