The Ninth Postcard from Marseillan

Last summer, staying in the Languedoc again, I posted  eight 'Postcards from Marseillan'  here on Life Twice Tasted. I was determined to share with you my feelings about  this very special place  which has inspired two novels. some time travelling and much happiness.


But now here I am in north Britain in November. It's dark at four o'clock and winter is looming  - the worst season of the year for me. (I suspect I may have that SAD disease, but I haven't yet checked it out.) And my writing friend*Avril has just escaped for a break in  India and the lovely *D is just back with pictures and stories of quick Autumn flip across to Marseillan. She writes that she had coffee in the market cafe with our friend Laurence* who knows everything about Marseillan

So, to cheer my self up I decided to tidy up the Life Twice Tasted mansion.  (Hope you like it...). And my virtues was rewarded. In the process I came across a ninth Postcard from Marseillan written especially for a competition which never materialised.

That  postcard was never posted, so I decided to post it here now to bring a little sunshine into my dark day and perhaps into yours too.

This Ninth Postcard  reflects a very special visit we made to the ancient port town of Sete.
I hope you too on this November day
enjoy this touch of sunshine and the sea.

'...So, our car crawls round and round and up and up this extinct volcano. Not what you think, Joe. Just a conical hill now. We pass pale, shuttered houses and jutting bougainvillea. (Did you know the person who discovered Bougainvillea was a woman who disguised herself as a man in order to accompany her botanist lover on his circumnavigation of the globe?)
Anyway, we jump out to a panoramic view across a great, shallow lagoon - they call it an étang – that edges onto the blue Mediterranean.  We look down at the city of Sête – more Neapolitan than French – whose  elegant quayside buildings glitter golden white in the sunshine, beside  the artificial waterways and inlets which are hemmed with fine boats of every kind – these days dedicated as much to leisure as commerce.
Being a history geek, Joe, you’ll be interested to know that the Greeks helped to build this port around 600 BC, importing spices and luxuries from the East in exchange for Langedocean oil and wine. Then the Romans occupied it in their bid to conquer the world. Then, when France became France, the French took over the city from the native Languedoceans.
Later that day we took a boat trip on the étang. You would have loved it. We went to a place on the water where they farm the biggest oysters in the world. The ‘field’ consists of a series of square wooden frameworks sitting on the surface, with thousands of ropes hanging down to the bed of the lagoon – a kind of forest, with hundreds of thousands of oysters and mussels attached to them. Like so much fruit.
According to the bronzed god driving the boat they fix baby oysters to the lines with dots of cement and leave them there to devour plankton to their hearts content in the warm, tide-less waters of the lagoon. He said these mature in a year, unlike the oysters grown in the cold Atlantic which take three years to mature because they close up and stop eating when the tide comes in. Or goes out. I forget which.
It was D’s birthday, so we crowned the day with a feast of these fruits of the sea, artistically presented in size order on small volcanoes of ice. The restaurant was a deceptively simple shack up a narrow track on the edge of the étang. Owned by family who had harvested the sea for generations, the shack was open to the water. We passed tanks of oysters, and made our way to simple chairs and tables topped with industrial glass behind barriers of bleached wood that glittered in the sun.
We toasted D with glasses of crisp Picpoul de Pinet and gulped back these magnificent oysters; it was like swallowing the sea, going back to the very beginning of everything. I don’t know whether oysters are aphrodisiacs but I have to say I ended up very happy. Wish you were here.  Love, W


Links for You Avril  Debora  Laurence 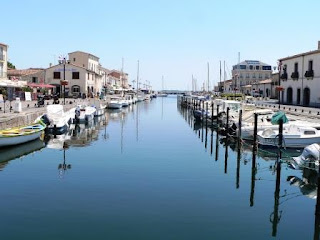