My house is close by  Auckland Castle – the home of the Bishop of Durham - which, in the  last thirty years. has been part of  our family experience.  I have have walked in the adjacent Bishop’s Park in all seasons.  The park and its Deer House feature in several of my novels. not least my latest An Englishwoman in France. My daughter was married  in the Bishop’s Chapel and after the wedding we emerged into the winter dusk to sparklers and mince pies. I have sent visitors there in Autumn to relish the wonderful autumn colour made so because of the inspired planting two hundred years ago. I have been to concerts and events there and walked off many a dark feeling  on its wandering pathways.

I admired a series of thirteen rather dark paintings in the dining room – the inspired purchase of a former bishop. These were eventually cleaned to reveal thirteen portraits of Sevillian citizens by the Spanish painter Zurbaran – to represent Jacob and his twelve sons – founding fathers of the twelve tribes of Israel. They were originally destined for South America but  by a series of coincidences - including piracy – became the property of this bishop.

In a recent example of what is a modern brand of piracy. the Church Commissioners attempted to sell the paintings, now valued at fifteen million pounds, to the highest bidder. A campaign began to swell among to local people, led by Dr Bob McManners  of the Civic Society. Then local and County councillors. the local MP  and many others swelled the ranks. The Northern Echo lived up to its own heritage as a campaigning newspaper and took up and endorsed the cause, providing the much needed oxygen of wider publicity.

I sensed a helplessness, a hopelessness here and there. After all where stood the needs and identity of people in a small town in opposition to the ravages of  asset stripping bureaucrats of  the institutional church? The campaign was well meaning but really a lost cause wasn’t it?

And Lo!  there was a miracle!

TWO wealthy financiers have teamed up to save the Zurbarans and potentially turn Auckland Castle into a major heritage tourist attraction, The Northern Echo can reveal.

Evangelical christian Jonathan Ruffer has agreed to buy the Zurbarans for Auckland Castle.

Mr Ruffer, 59, was born in Stokesley in North Yorkshire, believes the masterworks should be put on public display.

It is hoped that there were be several sources of money for the Auckland Castle project, including the Heritage Lottery Fund, the Art Fund and the Department for Culture, but £1m has already been pledged by the Rothschild Foundation, a philanthropic organisation chaired by Lord Jacob Rothschild.’

So a stranger has intervened in the history of this town which will now be changed by his action. It’s an object lesson for all of us, in these times of powerlessness, to see what can be done when ordinary people get the bit between their teeth.

Today, splashed across the front of the Northern Echo  is the Good News. it’s time we had Good News don’t you think?

Launching An Englishwoman in France 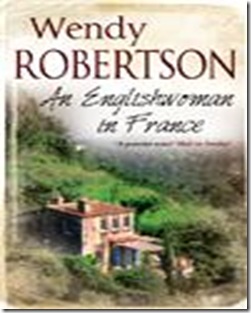 Please join me 7pm in Ponteland Library on Wednesday 13 April     to celebrate my new novel —                   An Englishwoman in France— the first of a three novels set in the Languedoc—an atmospheric and strange part of France which I love. Share with me some of the story and the novel’s secrets over a glass of wine. I look forward to seeing you

Copies will be available

(If you can’t get there the novel is available on Amazon  or you can obtain a copy from me at wenrob73@hotmail.com)

…Stella is pretty relaxed about her gift of second sight, but . . . my partner Philip thinks I’m barmy. No, seriously, he thinks I’m mad! In fact I’m very normal – normal as any of us ever is. Me, I see the dead in the more ordinary way of things. I saw this woman standing behind the woman at the till in the Spar shop. She was very old and wore a red sari with gold edges. She was like smoke in the air . . .

Stella’s happy-go-lucky attitude to her gift screeches to a halt when Siri, her twelve-year-old daughter, is savagely murdered and Stella can find her daughter nowhere, in this world or the next. Then, in the old French town of Agde she meets Louis, a clever, mysterious man and a young boy who is always near him. These two lead her to a place and a time where her search for Siri takes on a new meaning.

From ‘The Romancer’, my book about the writing process: 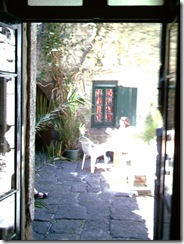 This house is the inspiration, of course, for An Englishwoman in France. From the first time I saw it I had this weird feeling that I knew this place, that I’d been here before. And so the writing, the chapters, started to unfold in my head and find their way nto The Notebooks. I felt there had to be someone here who could see – even move through time into the layers of the old city. And so the astrologer Stella walks into the story, into this house, to regain her sanity after the insanity of the murder of her daughter. She drops through time to meet the boy who will eventually be martyred and become St Tibery, the patron saint of the mentally ill….’