My Guest this month is Irish Writer James Lawless, whose novel Peeling

Oranges I so enjoyed and commented on, HERE on on Life Twice Tasted.  Readers will be interested in James creative point of view and many of the points he makes here will chime with both experienced and aspiring writers. He certainly makes me want to read more of his books. W.

James says:
"I write what I hope is accessible literary fiction. Normally the initial impulse is the itch of an embryonic character forming, and when I start to work on him or her  that dictates the plot. In other words character driven narrative.
In some of my novels that demand historical research, the more I research  the more the work seemed to take off like a type of osmosis from my reading. Because I write poetry, thia  informs what has been described as the sometimes lyrical style of my writing.
I think good and memorable writing is almost as important as a good storyline and I strive to combine both, often spending a long time on the construction of a sentence or a mot juste.
How about the evolution of style and content in your novels? W.
Peeling Oranges, my first novel, was driven by my quest to understand things that had been inculcated into me like idealism, religion, nationalism and one’s native language. So this novel, as it is with a lot of first novels, had autobiographical elements even though the characters are fictitious.
From there I moved on to a wider canvas. I write a novel essentially to find out something. For example my second novel For Love of Anna explored the devouring monolith of capitalism and when I wrote Finding Penelope I wanted to see the world from a woman’s point of view. I believe to be an artist one needs to be able take an 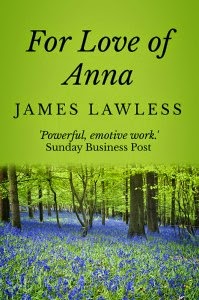 And what about the writing process itself? W.
The writing process  affords me the freedom  to explore the why? of things. I believe life is not what you make it (which is a luxury for many) but what you make of it. I believe there is an ascetic  and spiritual calling to be a writer or artist and, as Virginia Woolf would agree, there is no time for messing about. That is not to say you take yourself unduly seriously, just that you  should take your art seriously.

So, how do you see the role of historical figures in your fiction? W.
I used historical figures in Peeling Oranges such as Franco and de Valera and Michael Collins who have cameo roles, and in my latest novel American Doll I use a lot of factual stuff about 9/11 as background. But I don’t believe in recreating say a fictitious Michael Collins as a main character in a novel. I believe such writing is a form of cheating and, while one does a certain amount of re-imagining, it is not a true imaginative creation as a lot of material is ready provided. Besides if I want to learn about Michael Collins, I would prefer to consult primary factual sources, rather than have to wonder what is true in a second hand interpretation.

Where did the original impulse to write come from? W.
The seismic jolt of my mother’s sudden and premature death propelled me into writing. Up to that time death was something remote that happened to other people.
Also there was a lot of insularity and provincialism when I was growing up which I explored in an attempt, as Joyce would say, ‘to escape the nets’. My European travels, particularly in Spain (I did a degree in Spanish), helped to broaden my world view.

And which writers have inspired you? W.
I love Virginia Woolf  for her attitude to the novel as an art form and the beauty and resonance of her prose as in To the Lighthouse. I admire James Joyce of course for stretching our limits and Cervantes for starting the whole thing off. I appreciate  Pasternak for his poetry and the purity of his vision and the sacrifices he made for his art are an inspiration.

What about the role of research in your writing? W,
Up to now there are have been types of novels that I write: the purely creative and then  the creative with research backup. For Peeling Oranges I researched in the national archive which had opened to the public at the time to reveal a lot of previously censored material about the Irish and Spanish civil wars. The research took over two years before I even started the novel. The novel Knowing Women however sprang from the source of the creative well and factual references would have been subliminal and contemporary. American Doll brought me back to research again, which took about a year before I put creative pen to paper, although all along I had the embryos of characters forming in my head.

And what do you particularly enjoy about writing?W.
As I said the opportunity it affords to explore the why of things. Sometimes in conversation, one thinks in hindsight of what one should have said. Writing gives you the time to say exactly what you mean. Also I would find life rather dreary without having a story in its formation to carry around in my head.

Do you have a writing routine? W.
I have converted a small bedroom in my suburban house into a study believing, as Virginia Woolf does, that one needs a room of one’s own to create. The trouble is the internet frequently intrudes and I lack the will power to turn it off. I counteract this frequently by having recourse to my cottage in the mountains of west Cork which is internet free, and therefore is better for forcing one to engage with the written word.
I write best in the morning, but a lot of my time is taken up at the moment in corresponding with translators of my works. I often take a manuscript with me on a sea holiday. Sitting on a chair close to the waves is ideal for editing as well as being lenitive.*

And your latest work? W.
For Love of Anna is my second novel and was originally published in 2009. It is heartening to know its relevance is valued and it is still in demand, prompting a new edition in 2013. There are three main strands running through it. Firstly, it may be read as a poignant love story — Anna is a ballerina with whom the main protagonist, the university student, Guido van Thool, falls in love.
But Anna is also an acronym for Anarchists of the New Age, which brings us to the second dimension of the novel as an ideological story positing ideas in the mind of the philosophy student Guido, in the wake of the collapse of Russian communism and the dilution of oppositional politics, on what alternatives there are to the all-devouring monolith of corporate capitalism.
Anna wants to steer Guido away from this sort of 'dangerous' thinking, but his friend, the anarchist Philippe, keeps goading him. Paralleling the lives of the lovers is that of a corrupt judge, Jeremiah Delahyde (the third strand) who literally crashes into the world of Guido and Anna on a fatal New Year's night."

You can check out reviews of this book at http://www.amazon.com/James-Lawless/e/B001JOXD96

Opening lines of For Love of Anna
Guido van Thool, blond head downcast with little round spectacles perusing a book, is about to enter the door of Loti’s café in the old quarter of Potence when he bumps into a girl, knocking pumps out of her hands. He apologises, picks up the pumps, lets his book fall in the process, picks it up and rising, reddens slightly, as his eyes are drawn to long shapely legs protruding from a white wool coat.
The girl smiles doe-eyed, and his mind becomes suffused with the idea that he has just bumped into the most beautiful girl he ever saw, and she’s about to walk away....
Publications.
Novels
Peeling Oranges
For Love of Anna
The Avenue
Finding Penelope
Knowing Women

Criticism
Clearing the Tangled Wood: Poetry as a Way of Seeing the World

NB. These books have been translated into several languages and can be checked out at
http://www.amazon.com/James-Lawless/e/B001JOXD96/ref=ntt_dp_epwbk_0
The Avenue or Finding Penelope could be good novels to start with.


* A rare thing! I had to look up 'lenitive'! It is absolutely apposite here. The learning curve continues... W.