A Surreal Treat from The Pied Piper of Cullercoats

On Saturday our Room to Write Trio ploughed through walls of Northumberland Rain to spend a day at IRON AGE a very different literary Festival in the little fishing village if Cullercoats  on the North East Coast.  For five days the village hosted  the fortieth anniversary of IRON PRESS (set up in 1973): an example of independent publishing  to be celebrate in these days of depression and downgrading in the broader field of publishing.

IRON PRESS is the literary child of one-off writer, playwright, cultural entrepreneur Peter Mortimer. Over the years what started out as the influential  literary magazine IRON  in the 1970s has evolved into a full blown independent publisher IRON PRESS,  dedicated to finding and publishing writers and poets of quality and originality.


The festival was presided over by Cullerocoats' most illustrious literary resident Peter Mortimer who like the Pied Piper had enticed here hundreds of the literary and musically  minded young at heart  from across the north, including writers, poets, musicians - some to bread or perform, some to just relish the special atmosphere that seems to gather around Peter who has managed to sidestep the be-fogging bureaucratisation of the arts and retain his originality and iconoclastic vision of the nature of artistic enterprise. 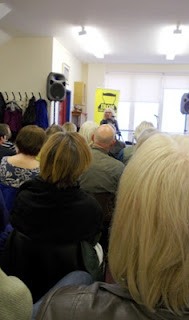 Novelist Kitty Fitzgerald reads a short story from her new collection Miranda's Shadow.  The talented Kitty works alongside Peter Mortimer as editor and quality controller to ensure the high standard ot the IRON PRESS list. She has been the other  key player in the success of this vivid festival, "There is nobody quite like Almond writing in adults' or children's fiction today. A writer of visionary, Blakean intensity."
The Times
"David Almond's books are strange, unsettling wild things. They are, like all great literature, beyond classification:"
The Guardian